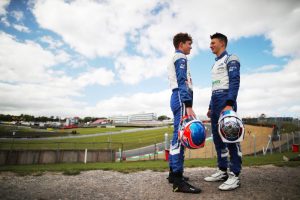 British Formula 4 rivals Kiern Jewiss and Ayrton Simmons have admitted to being caught out in qualifying at Brands Hatch this morning.

The pair will start fifth and sixth for this afternoon’s potentially title-deciding race, in which Arden’s Seb Priaulx will be starting from pole. Double R Racing driver Jewiss leads JHR Developments’ Simmons by 62 points, with 75 available in three races this weekend.? Irrespective of Jewiss’s result, Simmons has to finish race one in the top four to remain in title contention.

“It was a bit unfortunate. We geared up for a cold session in the morning. So we set the car up the same as yesterday morning, which was several degrees cooler,” Simmons explained to Formula Scout.

“The temperature didn?t quite work to our favour. But we?re still sixth. Kiern right in front of us. Could be a chance for us to outscore him. I know it?s hard, and I?ve got to win all three races I think [to win the title]. We?ve got both Red Bull drivers [Dennis Hauger and Jack Doohan] behind us as well, which is good for second place at least. We can work from here.”

Jewiss added: “I was pretty fast in free practice yesterday, and then this morning the track was very very quick and some people popped in some good times out of nowhere really. And I think it all hit us quite hard.

If Jewiss finishes on the podium he is guaranteed the title, and can afford to lose 12 points to Simmons and still be crowned champion.