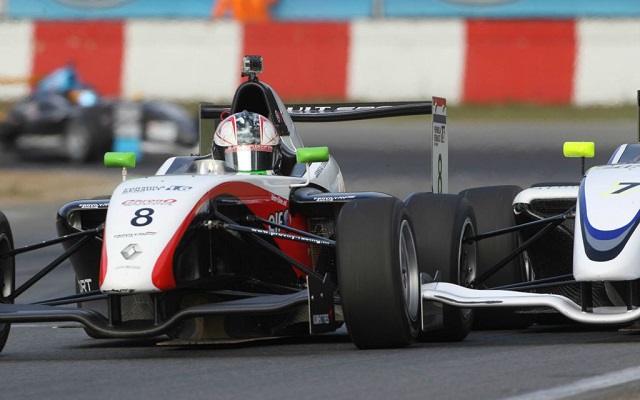 Esmeijer, 16, raced with Provily in FR1.6 NEC 2013 following his graduation from karting. The Dutchman was an outside contender for the title throughout the season and wound up finishing third behind rivals Roy Geerts and Martin Rump. He also had a guest outing in the FR1.6 STCC round at Knutstorp, picking up a podium finish.

Kolff, 16, will be making his debut in single-seaters after a karting career that spanned successes in the local 4-Stroke Sprint Chamionship and numerous outings in European Rotax categories. He made his car racing debut in 2013, managing a podium in four races in the Dutch Suzuki Swift Cup, and is backed by McGregor Fashion Group.

Defourny, 15, is a Belgian karting graduate who won the Benelux KF5 Championship in 2010 and finished second in the 2011 edition of Trofeo Ayrton Senna KF3. He tested with Mark Burdett Motorsport in Formula Renault NEC in the 2013 post-season.

The trio will be joined by part-timer Simon Mirguet, who is set to contest the first three rounds of the 1.6 season with Provily. Mirguet, 17, has been everprsent on the Belgian karting scene during the recent years, winning the Belgian championship in the Mini class in 2007, finishing as Cadet runner-up in 2008 and taking fourth in the KF3 class in 2010.