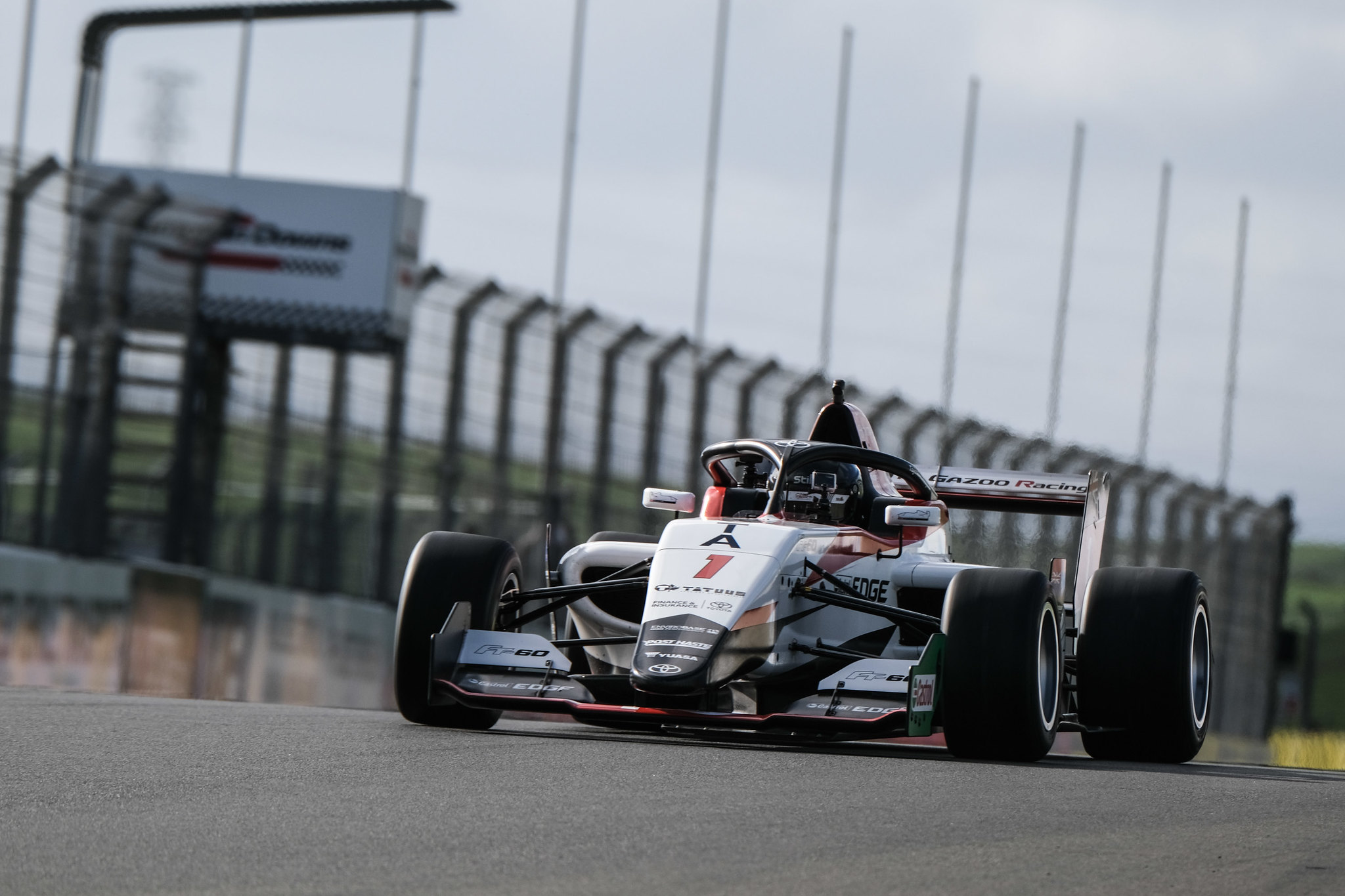 The lack of available quarantining space for international drivers has meant this year’s Toyota Racing Series will have a grid of home talents. Some are already established talents, but others are new to the limelight

Over the past 10 years, the Toyota Racing Series has emerged as the lead winter series for junior single-seater drivers across the globe. That international appeal has led to many future Formula 1 drivers taking to the championship through January and February – including series champions Lance Stroll and Lando Norris – but also boosted the careers of local talents such as current Formula E star Mitch Evans and Red Bull’s Formula 2-bound junior Liam Lawson.

Both of those came to TRS after time spent racing in New Zealand’s Formula Ford scene, and that’s where many of the 2021 grid has come from too thanks to the support of the Kiwi Driver Fund. The drivers making that jump this year, and from other lower-level series in the country, spent several days testing TRS’s old Tatuus FT-50 car under the watchful eyes of Toyota Gazoo Racing New Zealand and top team M2 Competition in 2020, and two days each in the Regional Formula 3-spec successor FT-60.

M2 is providing technical and engineering serives to a number of those drivers who will now be racing, as well as running a few of the all-star names appearing for the Hampton Downs season opener to contest the New Zealand Grand Prix. The contingency plan by TGR NZ to bring in some of the country’s greatest racing drivers of the modern day has ended up being critical, as it means the grand prix – one of few across the world for junior single-seater cars – will be contested by a decent sized grid despite the absence of international drivers.

A few of the famous names could commit to the full TRS season, and it’s likely that Australian Supercars champion Shane van Gisbergen – who has signed autographs for most of his TRS opposition – and Daniel Gaunt will stay on for the second Hampton Downs round due to their connections to the circuit, but for now they’re all only confirmed for round one. 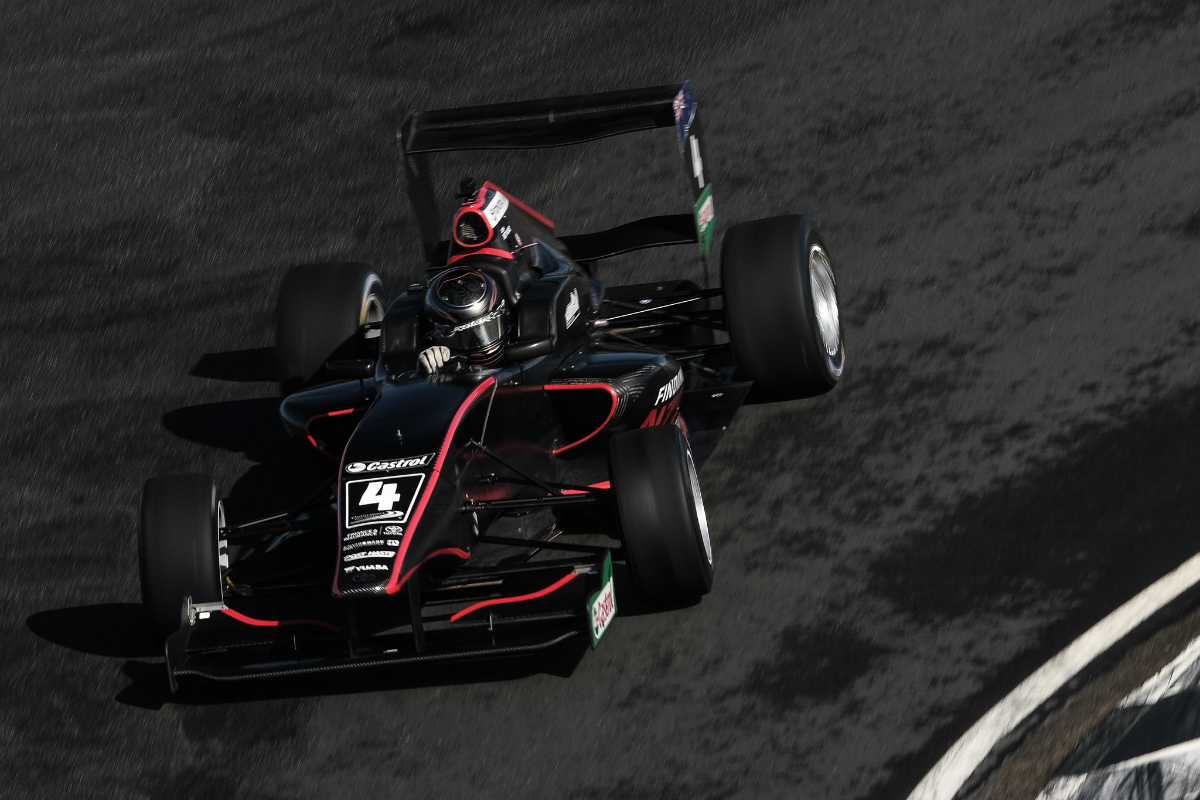 The soon-to-be 18-year-old has been a FFord racer since he started car racing in 2017, although did spend a season in United States Formula 4 before returning to his home country and wingless competition.

Most of Bethune’s racing at home has been on New Zealand’s South Island, which probably won’t be of huge benefit when the entirety of the 2021 TRS calendar takes place on two North Island tracks.

Bethune has experienced Manfeild – venue of the TRS season finale – twice, and of course his time spent in F4 will be very useful for understanding the demand of a car laiden with downforce due to slick tyres and aerodynamic appendages.

And even more than that, Bethune’s been in cars for longer than most of his full-time TRS rivals so will have a wider array of working practices – even from short track dirt racing – he can bring to the track and apply himself.

Bethune has pointed out that the jump from F4 to Regional F3 is not as hard as the transition from karting to FFord, and the physicality required for FFord and F4 racing is very different at their different speeds. That gap grows when in an F3 car, so Bethune’s F4 experience may prove crucial when the TRS weekends are packed with track time. 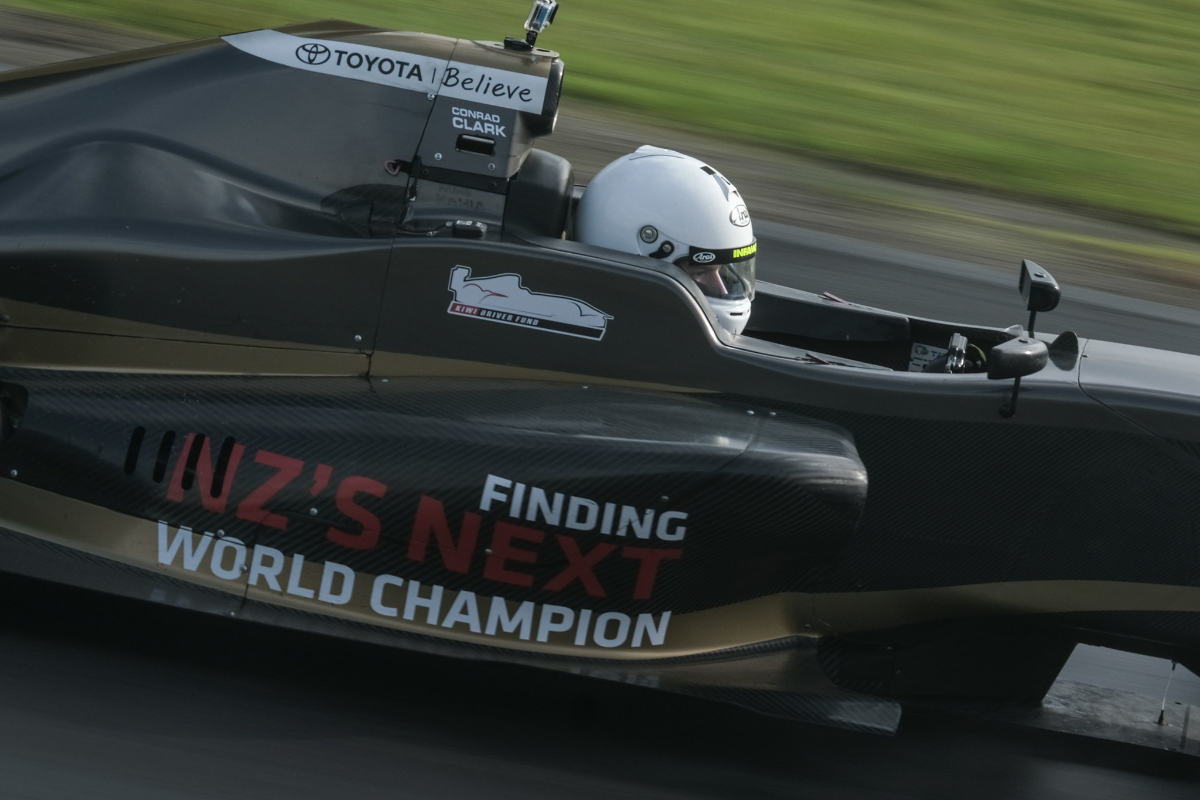 For everything Bethune benefits from his F4 experience, Clark benefits double as after his similarly tricky campaign in the US he relocated his racing efforts to China and dominated the country’s F4 championship in 2019.

Clark won 12 out of 17 races that year, including a run of eight in a row and both of the races that supported F1’s Chinese Grand Prix at Shanghai. Therefore he knows how to race under pressure, but he’s been one of the unlucky ones who didn’t get to race during the coronavirus pandemic – which New Zealand has successfully ended domestically.

After his F4 title success, Clark did get some Regional F3 mileage in Asian F3 testing at Sepang, but then didn’t get in a racing car again until TGR NZ’s trials of young Kiwi drivers in the old TRS cars during the country’s winter (pictured above).

Damp conditions meant much of that running was completed on grooved tyres, but completing that test at Hampton Downs meant Clark learned the short layout that will be used for round two and which he last raced on in 2018 in Formula First, which is New Zealand’s answer to Formula Vee.

He and several other drivers then headed back to the circuit last month to try out the current car, and more helpfully on slick tyres. Clark also knows Manfeild well, having started his car racing career on the circuit. But his lack of racing mileage in 2020 could hurt him. 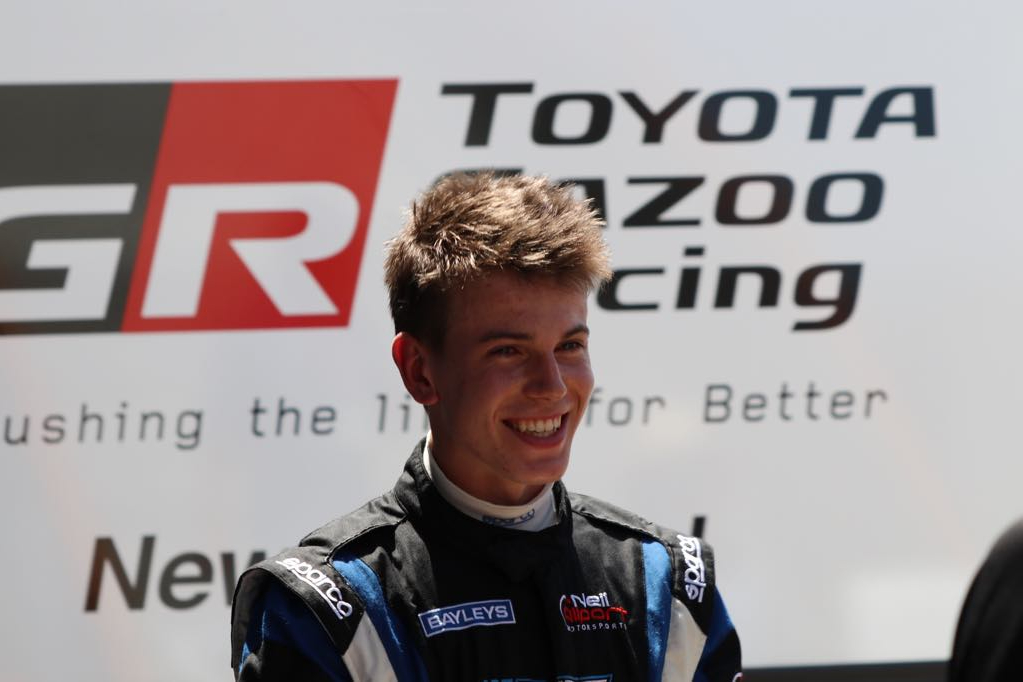 The reigning national FFord champion is the first of our entries to have spent the entirety of his time in racing without ever going abroad, rising up New Zealand’s karting ranks before getting his first taste of cars in FFirst aged 13 in early 2017.

His debut was actually supposed to come at the end of 2016, but several mechanical failures meant he didn’t get to qualify let alone race in the two rounds that started the season and ended the year. He switched teams in January 2017 and finally got to compete, eventually coming 14th in the standings.

Frazer picked up his first wins in the category’s Manfeild Winter Series, and when he returned to the national championship several months later he picked up three podiums – including a win – and came just behind Clark in the points.

A third season was then spent in the category, where he picked up one more win, while several rivals moved up to FFord.

Frazer’s delayed move into the more famous wingless series proved worthwhile though, as he was a comfortable winner of the Manfield Winter Series in 2019, and kicked off 2020 with six wins out of six races in the South Island series before taking a slightly surprising title in the national series as a rookie.

Showing how quickly he can transition in the move between the two lower categories should be an ecouraging sign for the far larger step up to TRS. Frazer is rated highly by the team that has worked with him in testing so far, and if he can navigate pandemic restrictions then he could be following Bethune and Clark down the US racing route. 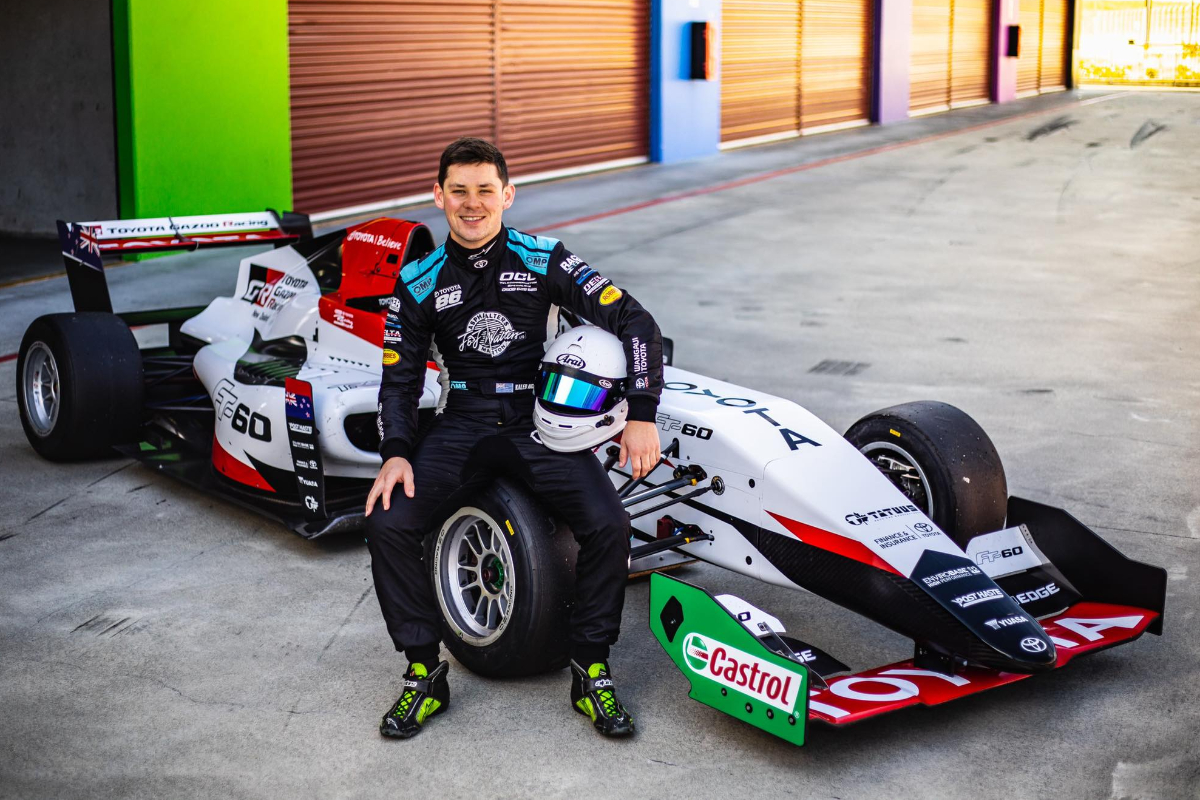 While Ngatoa’s results may not have had the peaks of some of his rivals, he is highly rated by Toyota’s NZ operation and has reportedly been seriously impressive in TRS testing.

But seventh place in the 2019-20 NZ FFord season was less to do with Ngatoa’s driving and more to do with a bundle of mechanical issues that led to him changing cars entirely mid-season and then encountering even more issues. Of course everyone gets their fair share of mechanical frustrations in club racing, and in the end Ngatoa only picked up a few podiums.

During that time he got to hang out with Red Bull juniors Liam Lawson and Yuki Tsunoda when they were competing in TRS, which could only have been beneficial. This writer can attest that Ngatoa is a better hockey player than both.

He spent the season before that in sportscars rather than single-seaters, competing and winning in the single-make Toyota 86 series. Post-season he also got his first taste of TRS by testing the Tatuus FT-50.

The sportscar move had followed starring turns in FFord winter series, which in turn came after becoming the NZ FFirst title runner-up in 2018 – ahead of Clark and Frazer.

Ngatoa is another to be linked to a US move for the future, but he will need to show his stuff in TRS first. 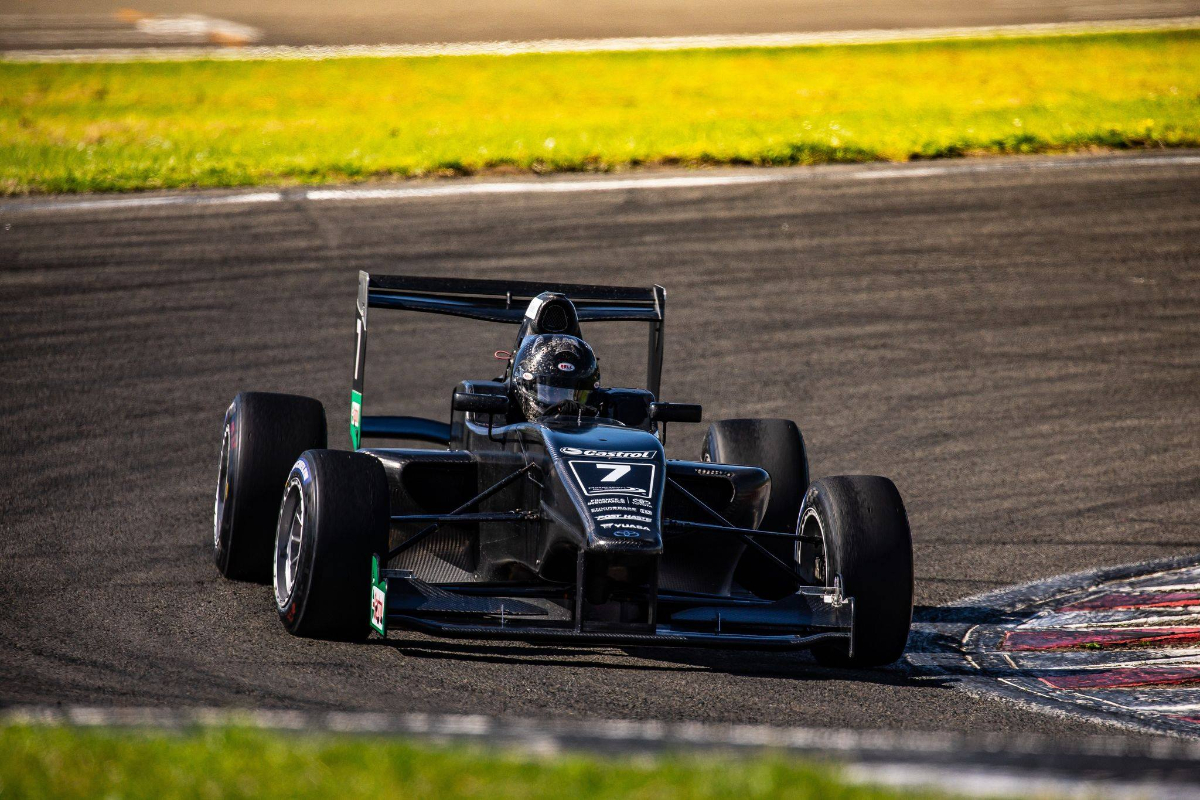 Making the biggest leap of anyone on the grid is Payne, who is yet to even race a single-seater car in the real world (but has raced F3 cars competitively in Esports). He’s already got his next steps lined up though, with his M2-supported run in TRS being followed by a move to Porsche Carrera Cup Australia later this year with Earl Bamber Motorsport.

Payne’s racing experience so far exists entirely in karting, most recently competing in shifter karts over in Europe.

Going straight from there into TRS isn’t unprecedented, with Emilien Denner making the exact same move last year and taking victory in his fifth race. In 2018, Clement Novalak came from OK karts, took two wins and came fifth in the points.

The list of drivers who attempted it before those two barely threatened the top 10, but that of course will be no issue for Payne in the smaller 2021 grid.

Emerging straight into F3 could actually be an advantage too as the driving requirements of wingless single-seaters and the aero-heavy F3 cars are so different that it can take some time for drivers well-versed in FFord racing to shake off habits that make you faster in lightweight cars but will actually make you slower through corners on grippier tyres in the higher formulae.

As long as he’s prepared, and a paddock source has told Formula Scout that seems to be the case, then there’s nothing to say Payne won’t be challenging his more experienced full-time rivals. And he shouldn’t be disappointed in himself if he is at the back on his debut weekend, given he will be up against Supercars legends and a Superleague Formula race-winner. 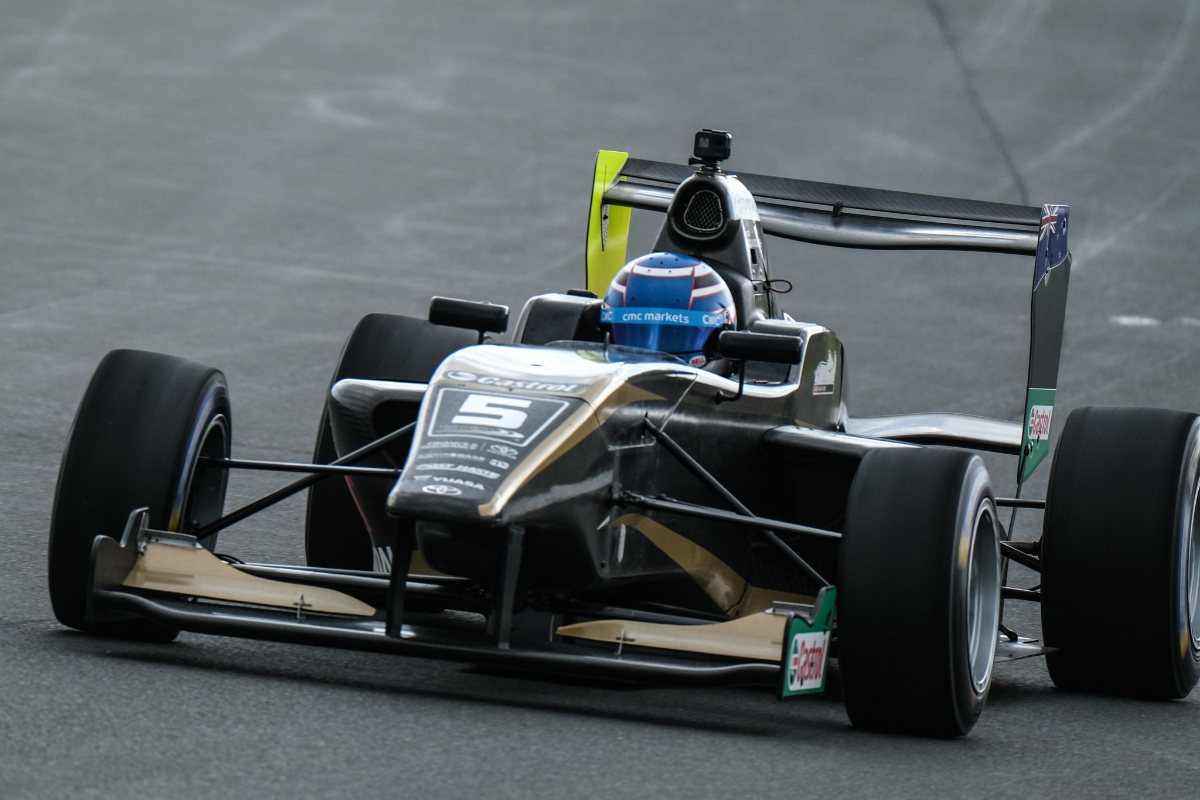 Like Payne, there is no single-seater racing career to reference for Vodanovich but he’s had a brilliant past 12 months driving.

The teenager has made his name in Toyota 86 cars in Australia and New Zealand, having started off in a BMW saloon that was over 10 years older than him when he first found the money to race after spending his younger years on a simulator.

He won in Utes and picked up a podium in his debut Toyota 86 season across 2017-18, then a first win on his return to the latter series for the 2018-19 campaign. Links forged with Australia and scholarship success led to him going to compete there for the Southern Hemisphere winter of 2019, and he progressed up the order in class and in the overall positions until a monumental crash on the fearsome Mount Panorama circuit.

That cut short Vodanovich’s campaign, but he bounced back in fine style on his return to New Zealand with his family team. With five wins and 11 podiums from 12 races he became champion, won some more in the non-championship final round held in September 2020 (with his title only confirmed the month before) once lockdown restrictions had eased, and then also starred in the two-round Endurance series in the final months of the year.

His home simulator now will now be set up to prepare for TRS, which may sway his career trajectory if it goes particularly well.