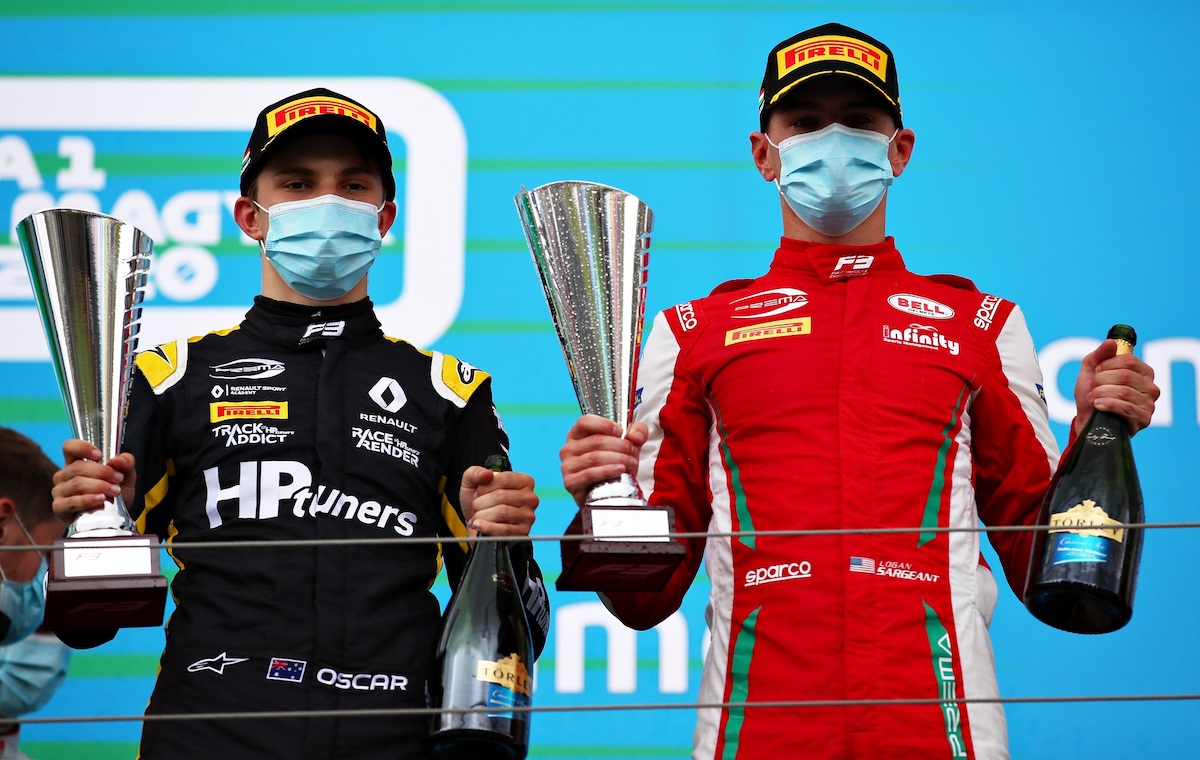 Prema drivers Oscar Piastri and Logan Sargeant have shared their views on the chaotic start to the opening FIA Formula 3 Championship at the Hungaroring that affected them and wiped out team-mate Frederik Vesti.

Sargeant locked up in damp conditions at the start and crashed into the side of pole-sitter Alexander Smolyar, taking the ART Grand Prix driver out on the spot.

Further round the corner, Jenzer’s Calan Williams spun into the side of Vesti, and championship leader Piastri also got caught up in the carnage.

Despite the contact, both Piastri and Sargeant were able to secure podium finishes, behind ART’s Theo Pourchaire.

“I braked a little bit earlier,” Piastri explained in the post-race press conference. “Obviously starting on the right-hand side was a massive disadvantage in that race. I just got the best start that I could and then I think I saw Logan facing the inside wall so I knew some chaos was about to unfold.”

Piastri also explained why both the front-right and left-rear tyres no his car were changed during the red flag period following Hitech’s Liam Lawson’s fiery exit.

“I came through and [Williams] clipped my left-rear so I think I had a broken rim or a slow puncture. So, we had to fit a new left-rear during the red flag and because the car was unbalanced, I was locking up the right-front a lot, so we had to change that as well. But the start was very chaotic and I’m pretty happy I got up to second though all that.

“I wasn’t sure if I had damage to the suspension or whether we were just slow. I think tyre deg was really bad, for myself anyway. So there was nothing I could do to stay any closer [to Pourchaire].”

Sargeant, who is second to Piastri in the championship, gave his side of the incident.

“Obviously starting on the inside of the grid was a massive disadvantage, [with] a lot of water and I sort of got stuck on the inside, I couldn’t find my way out and I just hit the brake and immediately locked up,” he said.

“When I knew I did that I just tried to avoid everyone, so I’m really sorry that I ended up collecting Alex.

“The rest of the race, as Oscar said we didn’t quite have the pace today. I didn’t have a good feeling with the car so there’s quite a bit to analyse too. I definitely felt something was not 100 per cent, I’m not sure what but it didn’t feel quite right.”

Sargeant was not penalised for the incident, and said he was “not really sure” when asked if he was surprised to escape sanction.

“I would have respected the decision of the stewards, whatever they decided. But if that’s what’s they felt was right then I respect the decision,” he said.

Smolyar gave his own view on Twitter: “Today could be my first win in F3 but luck is not on my side. Also have few questions to the stewards…”