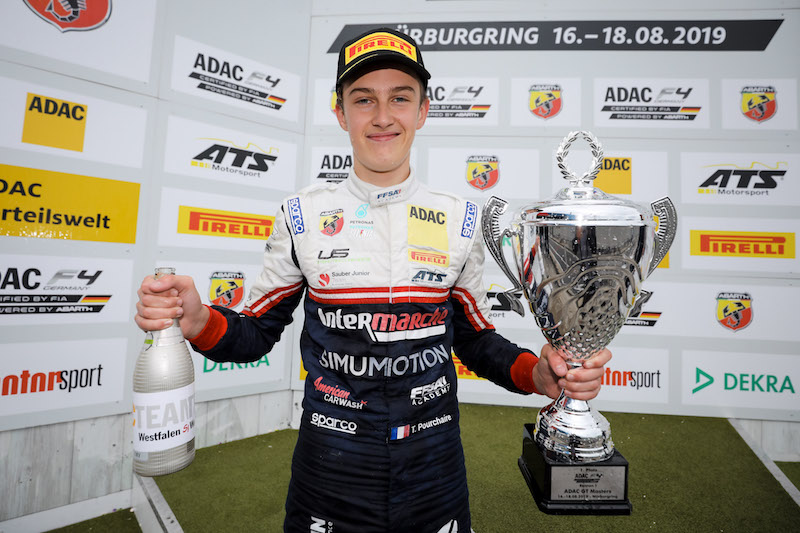 Theo Pourchaire increased his ADAC Formula 4 lead in race one at the Nurburgring with his second win of the year, handed to him when erstwhile leader Dennis Hauger suddenly slowed to a halt.

Van Amersfoort Racing driver Hauger made a great getaway from pole and retained his lead following an early safety car to retrieve the car of team-mate Lucas Alecco Roy after a first-corner clash in the pack.

But less than three laps after the restart, with his lead over Pourchaire at around eight tenths of a second, Hauger suddenly slowed and stopped in Turn 7 after hitting a piece of debris on the circuit which disconnected a power cable. It was the Red Bull junior’s sixth non-score in 12 ADAC F4 races so far this season.

That brought the safety car back out, with Pourchaire then controlling the final 10 minutes of the race to win by 0.734s over his US Racing team-mate Roman Stanek, who returned to the outright podium for the first time since his win in the opening round at Oschersleben.

Stanek moves from eighth to third in the standings as a result, while Pourchaire now leads by 53 points over Arthur Leclerc, who had a quiet run to 10th.

Ferrari junior Gianluca Petecof climbed from seventh to fourth in the points with third place ahead of Alessandro Ghiretti, who made it three of the Sauber Junior Team-branded US Racing cars in the top four places with a pass on VAR’s Ido Cohen at Turn 1.

Having qualified fifth, Leclerc took a five-place grid penalty carried over from Zandvoort and couldn’t make any progress in the race and finished up holding off Joshua Durksen, who had started seventh but spun on damp astro-turf on the exit of Turn 4 on lap one.