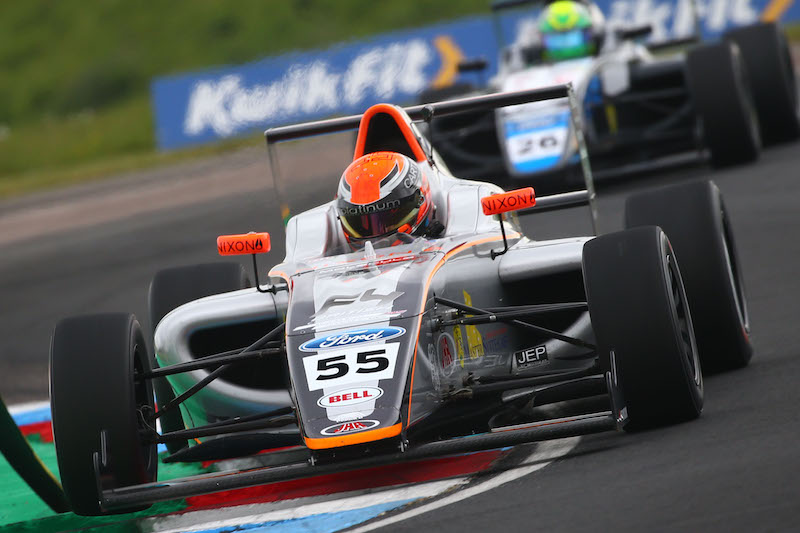 Carter Williams claimed his first British Formula 4 win with a faultless drive in race one at Thruxton.

The JHR Developments stormed into the lead on the opening lap after starting second, and was unchallenged throughout the 16 lap encounter.

Williams continued to build a gap to the rest of the field as Zane Maloney, Sebastian Alvarez, and Josh Skelton battled for the remaining podium positions.

He eventually finished 3.569s clear of the rest of the field to take his first win of the year.

Maloney broke through to second in just a handful of laps, having started fifth after a difficult qualifying. The championship leader started to close the gap to Williams, only to be reeled in by Alvarez and Skelton in the closing stages of the race.

A five second penalty for track limits dropped Maloney down the order on corrected timings, but it didn?t stop Alvarez battling for the position on track, and passed his championship rival?a handful of laps before the chequered flag to take second.

Skelton finished third ahead of pole-sitter Like Browning and Tommy Foster.

Maloney dropped to sixth with his penalty, with his championship lead over Alvarez dropping by 10 points to 44.

Third in the championship, Louis Foster also suffered a difficult race. After damaging his front wing early on, Foster came into the pits and dropped to the back of the field. He was able to get back on track, but was almost a lap down by the chequered flag.