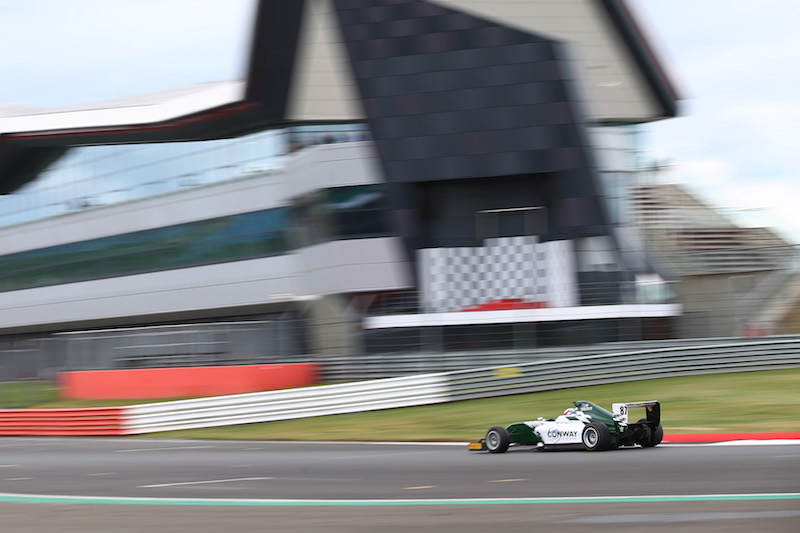 A late effort gave Kierns Jewiss his first BRDC British Formula 3 pole positions ahead of the penultimate round of the season at Silverstone.

Douglas Motorsport?s Jewiss set a time of 1m55.845s – the fastest lap ever recorded by a BRDC F3 car on the Grand Prix layout – in the dying seconds of qualifying to deny Hillspeed?s Sasakorn Chaimongkol a maiden pole by 0.117s.

Chaimongkol led the majority of the session, briefly trading top spot with Ulysse de Pauw, before setting a best time of 1m55.962s which proved good enough for second place in race one, just 0.001s ahead of Chris Dittmann Racing?s Ayrton Simmons.

Simmons will line up second for race three based on drivers? second fastest lap-times, with Chaimongkol fifth.

Johnathan Hoggard, currently lying second in the championship, was fourth fastest – a further 0.107s behind – with De Pauw qualifying fifth for Douglas Motorsport. The pair will start third and fourth respectively in the third race.

Championship leader Clement Novalak qualified in ninth and seventh after struggling to trouble the top times throughout the session for Carlin, ending up 0.687s adrift of pole, ahead of Hampus Ericsson for Double R Racing.