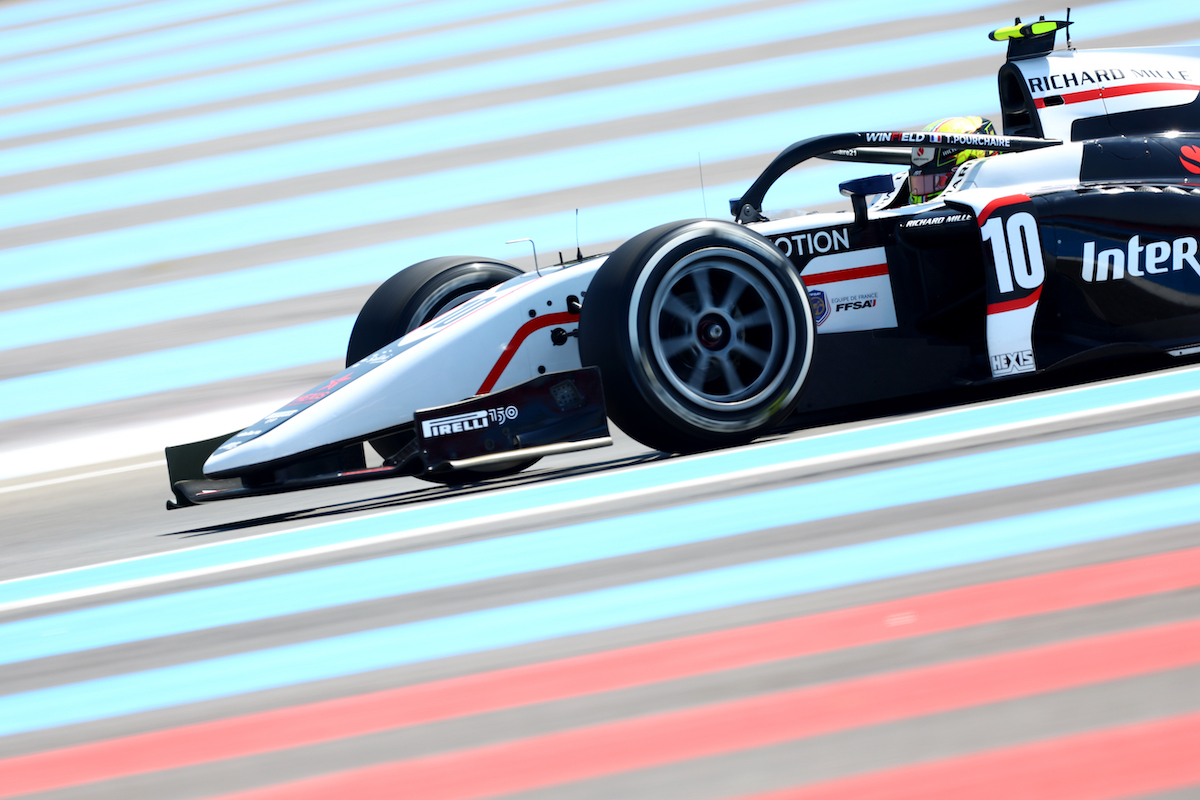 Theo Pourchaire has praised his ART Grand Prix team for a strategy that he was firstly unsure about but then paid off for him to finish second in the Paul Ricard Formula 2 feature race.

The Frenchman was running in fifth place behind his team-mate Frederik Vesti, when at the end of lap 10 out of 30 his engineer called him into the pit-lane.

As a result of that early stop, Pourchaire undercut Virtuosi Racing’s Jack Doohan, who ran in second place in the early stages of the race. Moreover, he gained a place when Carlin’s Logan Sargeant had to retire in the pits, and passed Vesti on the Dane’s outlap.

“I was not happy when my engineers told me ‘box, box this lap’,” Pourchaire said in the post-race press conference.

“Before turn eight he told me that, I told him ‘why, why, why should we box?’ because I think I was a bit quicker than Fred [Vesti] at this point. I did have DRS, I was catching him, but it was too difficult to overtake to be honest. He told me ‘yeah, but the prime tyres, so mainly Drugovich is starting to be a bit quicker than us, so we should box’.

“The most important in the team is to trust each other. I mean it’s important to be a team and understand everyone, and the engineers are doing a very good job. Today the strategy was on point, I cannot say anything else. Big thanks, and also to the mechanics, the mechanics did a very good pit-stop and then I did a very good outlap. It’s teamwork in the end, so big thanks to them.”

He explained there were two possibilities with the strategy: “To go very long with the options because they were not suffering a lot or to box a bit earlier if we are stuck in a DRS train like I was.

“I felt like I was a bit quicker on that tyre and I was losing too much time, so we tried to box, the undercut was amazing and I did some good overtakes as well when they had cold tyres.”

On his cold tyres, Vesti tried to defend the inside at turn three but warmer tyres allowed Pourchaire to drive around his outside.

“It is difficult to really say right now as I don’t really know what was going on in the race,” Vesti replied when asked by Formula Scout about the strategy.

“I obviously know that Theo was behind me when he boxed, and I came out right in front of him after my pitstop. But obviously I had the cool tyres and I was very quickly passed by both him and Jack.

“We’ll have to see. It can be some pace for me on the option when Theo boxed, and it can also be that the undercut was faster for what Theo did. That is what we need to check and analyse.”