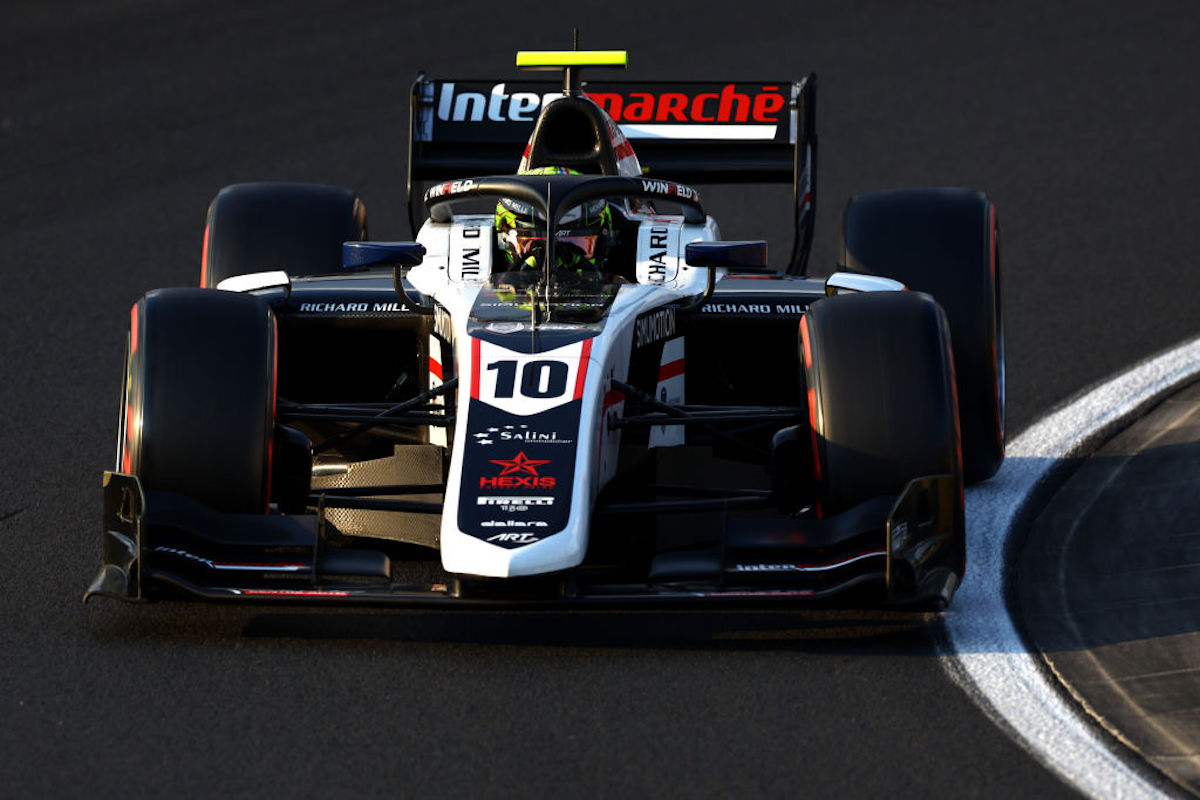 Hitech GP’s Marcus Armstrong raced straight into the lead past poleman Ayumu Iwasa at the start, while Pourchaire took the outside line entering turn one and went from fourth to second.

Armstrong opened up a gap in the first few laps, his soft tyres getting up to heat quickly, but he lost out when the pitstop phase began for those on the same compound.

Felipe Drugovich switched to the medium compound first, doing so from fourth place at the end of lap seven, then Armstrong, Pourchaire and Iwasa did the same a lap later.

Enzo Fittipaldi inherited the lead and he held on for two more laps with increasing degredation on the front-left before he pitted too, and successfully overcut the four who had been ahead of him.

Frederik Vesti, who started on the mediums, moved into a lead of almost three seconds over Juri Vips, while Pourchaire almost instantly passed Fittipaldi for 12th after he returned to track.

On cold tyres Fittipaldi had to then hold off Iwasa, while Drugovich and Armstrong were several seconds further back. He successfully did so, and once his tyres were up to temperature the group started to make their way up the order past the slowest of the drivers yet to pit.

Although Vesti opened up a lead of over seven seconds before his pitstop on lap 26 of 36, he had a five-second penalty for forcing Vips off track that he had to serve during it and he was going slower than those who had pitted. That meant he rejoined in a distant ninth, while team-mate Pourchaire had to wait a further three laps before picking up the lead as Carlin’s Liam Lawson and Logan Sargeant prolonged their stints.

Vesti’s chances of victory, despite being the highest placed driver on the faster soft compound tyre, then dissolved as he had several heavy lock-ups of his front-left tyre on his outlap.

Pourchaire managed his gap to Fittipaldi for the rest of the race, which included some light rain at turn one but not enough for the track to be declared wet, and claimed his third feature race win of the year.

Fittipaldi slowed on the final lap but still finished second ahead of Iwasa.

Vesti’s minimised tyre advantage eventually did come to use, and he and Vips rose to fourth and fifth ahead of Armstrong.

Drugovich faded late on to ninth behind Lawson and Richard Verschoor, while Sargeant picked up the final point in 10th.

Van Amersfoort Racing kept Amaury Cordeel out until the rain came, but he spun after his late pitstop and finished 18th after a long time in the top 10.

Prema driver Dennis Hauger was the first to start on medium and pit for softs as he struggled all race, but took fastest lap late on by doing a second pitstop, while Drugovich’s MP Motorsport team-mate Clement Novalak struggled on his first set too but then charged to 12th in the second stint.