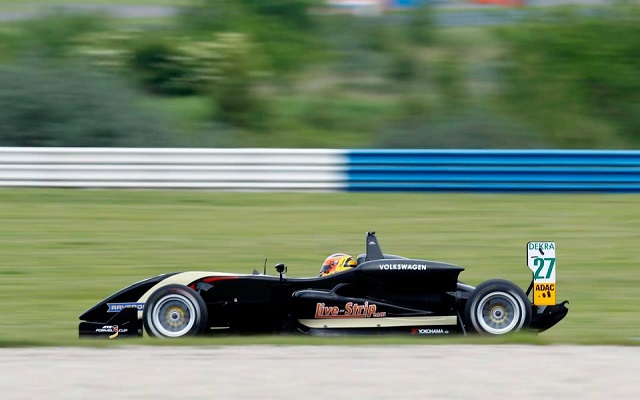 German F3 leader Markus Pommer was in a league of his own in the final race of the second round at Lausitz, securing his fourth win in six races.

The poleman was helped out by having the front row all to himself as Sam MacLeod stalled on the formation lap and had to go to the tail end of the grid. The Scotsman’s stall blocked off the way for Indy Dontje, who also stopped and had to join MacLeod at the back.

As the race got going, Pommer managed a smooth getaway from pole and pulled out a sizeable advantage over his rivals. Behind him, Nabil Jeffri cleared Nikita Zlobin to take second, with Zlobin also falling behind a fast-starting Weiron Tan.

However, Tan’s podium challenge didn’t last long as he dropped back, allowing Zlobin to briefly challenge Jeffri. The Malaysian withstood the pressure and was allowed to focus on chasing Pommer when Zlobin was overtaken by Nicolai Sylvest. The Dane didn’t manage to keep third for long, tumbling down the order after a couple of laps, but Jeffri had already made up a solid gap to the rest of the field.

As such, Zlobin was back into third, only to lose the position again on lap 13 when he was overtaken by a charging MacLeod.

Out front, Pommer crossed the line almost nine seconds ahead of stablemate Jeffri, ensuring a sizeable championship lead ahead of the round at Spielberg. MacLeod recovered to third, making it three out of three podiums at Lausitz.

Dontje worked his way around Zlobin on the penultimate lap to take fourth. Meanwhile, Sylvest passed Tan in the closing stages of the race to take sixth.

Andres Mendez and Maximilian Hackl rounded out the field in what was a retirement-free race.