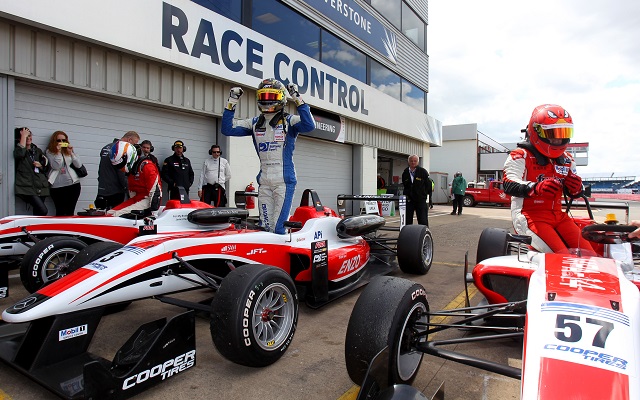 Marvin Kirchhofer picked up the second win of his guest outing in British F3 in race three at Silverstone.

The German, who competes full-time in the GP3 series with ART, stormed into the lead off the line and proved unmatchable for his competition, finishing 13 seconds clear of his teammates.

Kirchhofer was promoted to the front row of the grid when Egor Orudzhev picked up a five-place grid penalty for collecting Andy Chang Wing Chung in race two. When the race started, the German beat poleman Martin Cao to the punch and took the lead into turn one.

From that point on, it was a relaxing Sunday drive for the reigning German F3 champion as Kirchhofer immediately pulled out a gap on Cao and increased it lap after lap.

Double R Racing’s Chang managed a superb start to take third on the opening lap, but then went off, dropping to the back of the pack.

As such, it was Matt Rao who returned to third, soon catching up to Cao and putting pressure on his championship rival.

Egor Orudzhev fought his way up to fourth place and was looking to mount a challenge for the podium, but, on lap six, his team’s race completely fell apart. The Russian was forced off the track due to suspension failure, while his teammate Peter Li Zhi Cong had to pull to the side a few corners prior.

The race stabilized from that point on – Rao kept close to Cao for the remainder of the race distance, but couldn’t find a way through.

As such, the trio finished in that order – with Kirchhofer making the podium in all three races of the weekend.

Double R duo of Camren Kaminsky and Chang rounded out the runners, with the American beating his Macanese teammate by 3.6 seconds.