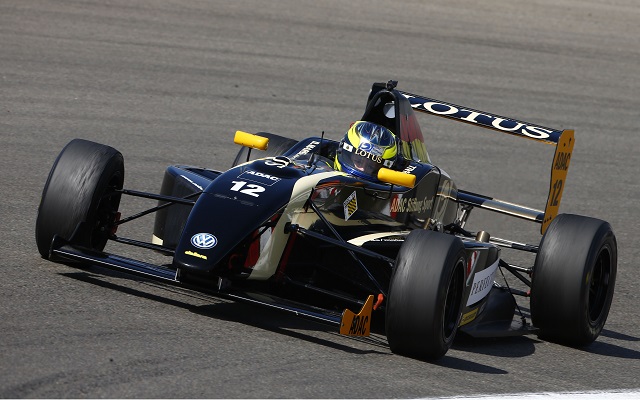 Lotus driver Dennis Marschall made the most out of a reverse-grid pole, converting it into a maiden win in race three of ADAC Formel Masters at Lausitzring.

Marschall managed a solid getaway off the line to narrowly beat teammate Luis-Enrique Breuer into turn one and never looked back, comfortably leading through the entire race distance.

An eventful few opening laps unfolded behind the leading Lotus duo as their teammate Joel Eriksson held on to third out of turn one and then came under pressure from Mucke’s Philip Hamprecht.

While Hamprecht could not get the job done, championship leader Mikkel Jensen could, passing them both in the span of a few corners and setting out after Breuer.

The Dane was, perhaps, a little too eager in doing so, and while the first laps provided the usual massive amount of position changes, further fuel was added to the fire when Jensen went wide out of turn one and clobbered through ad banner. He returned across the track, inadvertently blocking Ralph Boschung and Marvin Dienst and allowing teammate Tim Zimmermann through to P3.

It appeared that Jensen would be able to hold on to P4 as numerous cars lined up behind him, but, whilst holding them off, the championship leader went in too wide into turn one, clipped the grass and ended up going straight into the gravel, which is where his race came to an end.

His teammate Zimmermann was given some brief breathing room due to the chaos, but Boschung soon caught up to him and made the overtake stick into turn one. Dienst followed through shortly thereafter.

Maximilian Gunther find himself facing an uphill battle after a disastrous opening stint left him out of the points. The 2013 runner-up soon made his way back into the top ten before catching up to the drivers stacked behind Zimmermann. He cleared Eriksson for P7 before both of them gained a position due to Kim-Luis Schramm‘s brief off.

At the front, Marschall maintained a constant two second gap to Breuer throughout the race distance. Boschung appeared to initially make some ground up to his teammate, but then wound up settling for third place.

After 18 laps, Marschall crossed the line 1.6 seconds ahead of Breuer to secure his first win in the series. The man in second place had cause for celebration, too, as he made the podium on his debut weekend in the series.

Boschung took third, completing the first Motopark 1-2-3 in the series since 2011.

Fabian Schiller made it to the finish line in tenth place despite a last-lap incident with Igor Walilko. The Polish driver forced Schiller wide on corner exit when fighting for P10 and the German ended up tagging him into a spin. After skidding across the grass, both managed to rejoin.

Despite his mistake, Jensen narrowly leads the standings ahead of round four.