written by Felipe Giacomelli 25 May 2014 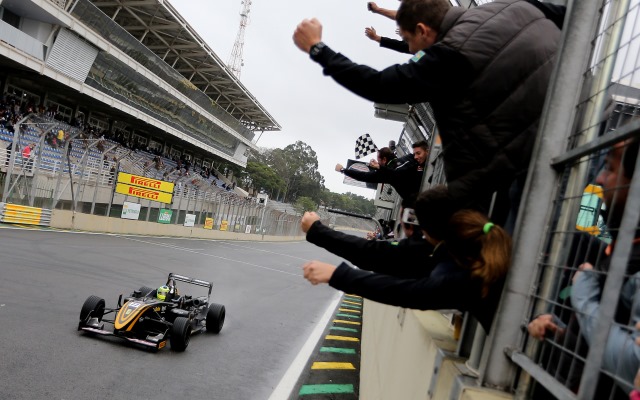 Renan Guerra won his first race in single-seaters in the second F3 Brazil race at Interlagos in chaotic final laps due to oil on track.

Filling in for Raphael Raucci this weekend, the MRF Challenge veteran was only fifth at the midway point but everything changed when Nicholas Silva?s engine gave up.

With all youngsters struggling with the mix of rain and oil, Guerra realized his best option was to stay away from the racing line. With much more grip than the other drivers, he was able to increase his pace. Firstly, he gained a position from yesterday winner Lukas Moraes ? who went off at turn four thanks to the oil ? and started to close the gap to the leaders.

Then, the R&R Weissach man easily overtook Bruno Etman for third place and started to put pressure on Pedro Piquet. The points leader went wide in a turn and gave Guerra momentum enough to took the second. With a pace three seconds faster than any other car, he closed in Vitor Baptista and had no trouble to gain the lead.

With less than two minutes to go, the Sao Paulo driver just managed his pace to receive the checkered flag.

Baptista finished second after led most of the race. The Cesario man lost the overall first place, but was able to keep his winning streak in Class B. Piquet was third, followed by Etman and Artur Fortunato.

Fortunato, actually, was faster than his teammate Guerra at middle stages, but couldn?t overtake. As such, he settled for sixth. Victor Miranda, Matheus Leist, Moraes, Arthur Oliveira and Leonardo de Souza rounded out the top ten.

On reverse grid pole, Sergio Sette Camara had a very tough day. With the race starting behind the safety car due to rain, the rookie maintained the first place. However, when the green flag was waived, he spun after touching the kerb even before the starting line.

With Camara misfortune, Piquet moved to lead, but wasn?t fast enough. As such, Baptista easily took the first position until the dying laps and all the oil.