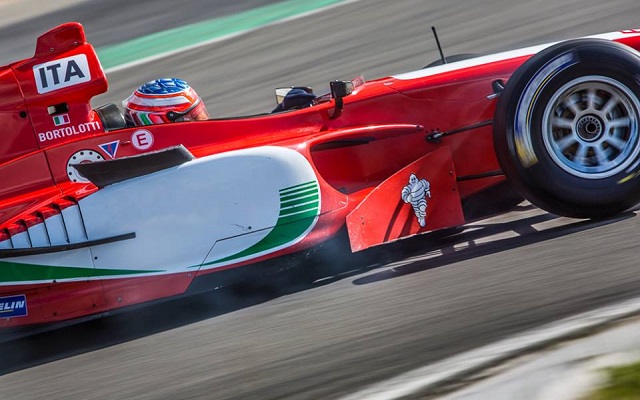 Bortolotti, who is yet to finish lower than second in the six races held by FA1 so far, prevailed in a race-long battle with Slovakian driver Richard Gonda.

Dutchman Nigel Melker, who topped Sunday’s qualifying, failed to make the start of the race due to a clutch failure.

As such, front row starter Sergio Campana had the advantageous position on the grid. Indeed, the Italian led the field into turn one, only to be overtaken by Gonda on lap one.

Campana and third-placed Bortolotti were resigned to chasing after Gonda during the opening stint, with the former taking to the pits on lap six. Bortolotti opted to stop a lap later and managed to clear his compatriot.

Bortolotti set out after Gonda in the second stint and pitted two laps later than the Slovakian, subsequently overtaking him for the lead of the race on the outlap. From that point on, the Italian controlled the remainder of the race, taking the checkered flag two seconds ahead of Gonda.

Campana did not factor in the fight for the win in the second half of the race, but managed to hold on to take his first podium in the category, completing a Ghinzani 1-2-3. The Italian driver managed to fend off series debutant Alessio Picariello, who recovered to fourth from seventh on the opening lap.

Sebastian Balthasar, whose car failed at the start of yesterday’s race, managed to salvage some points in fifth, leading rookie Jimmy Eriksson, with Picho Toledano completing the list of finishers.

As in race one, Nurburgring wound up taking a heavy toll on the FA1 machinery, as Dennis Lind, Oliver Campos-Hull, Armando Parente and Luis Michael Dorrbecker retired at various stages of the race with different mechanical problems.