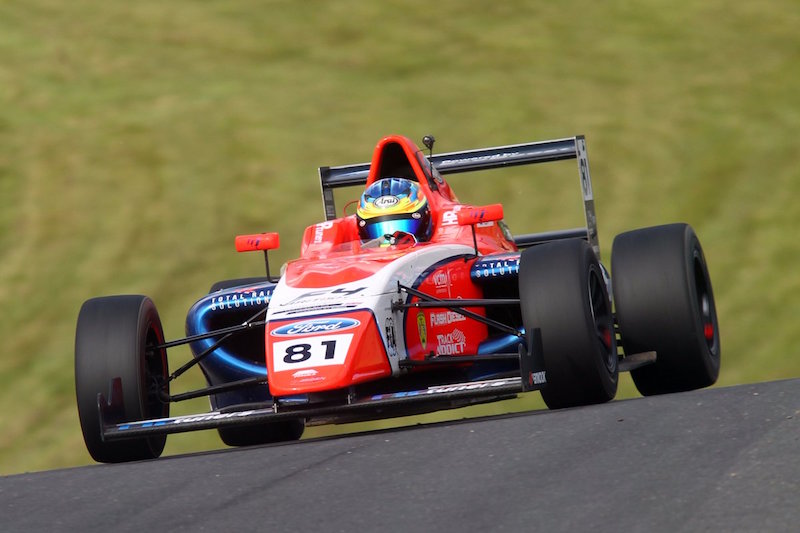 Caroline had to settle for fifth in a session disrupted by red flags, although he did get past Ayrton Simmons and then Logan Sargeant for third on the first lap, as Piastri retained the lead.

Carlin’s Caroline then grabbed second place from Quinn prior to a mid-race safety car, required after his team-mate Lucas Roy and privateer Jamie Sharp collided.

An error from Caroline on the restart allowed Piastri to re-establish his lead of over a second, although the championship leader did then cut the gap to just 0.321 seconds over the remaining five minutes.

When Caroline passed Quinn deep into the hairpin, Simmons also nipped past the Cornishman on the inside to take third.

Sargeant fell to sixth on the first lap, but did regain fifth when Linus Lundqvist went off. The Swede finished eighth behind compatriot Hampus Ericsson, who lost out in a battle with Fortec team-mate Oliver York for sixth but earned reversed-grid pole for the first of Sunday’s races.

The second race of the day was the postponed third race from the Oulton Park round, with the qualifying session at the Cheshire circuit defining the grid with Caroline on pole and Piastri alongside.

In slightly damp conditions, Caroline was two seconds clear at the end of the first lap and more than eight seconds in front when the safety car came out mid-way through the 20-minute encounter.

He wasn’t troubled by team-mate Sargeant after the restart, finishing up nearly two seconds ahead.

After losing second to Sargeant on lap two, Piastri ended up sixth after suffering a technical issue.

Karl Massaad benefited to claim the final podium place, in front of York and Simmons, who together with Piastri made late moves on Harry Webb after the Richardson Racing driver suffered front wing damage.