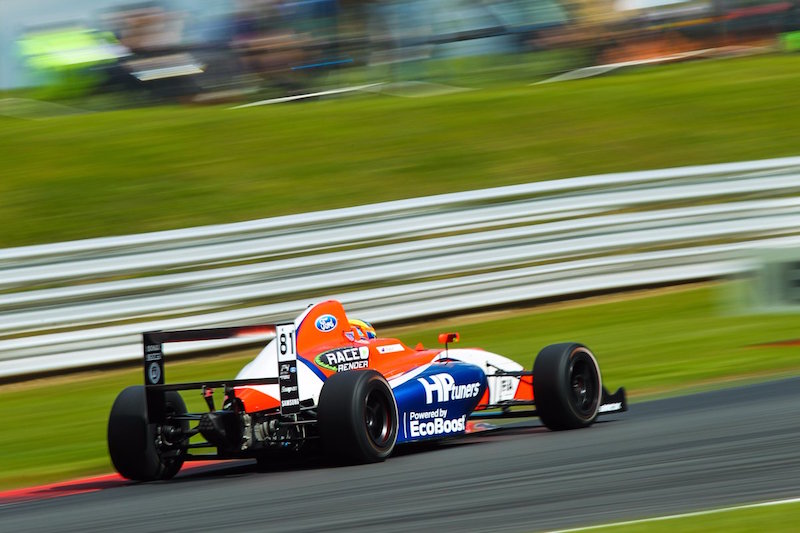 Oscar Piastri continued his pursuit of British Formula 4 series leader Jamie Caroline by taking his second win of the Knockhill event in the fourth and final race at the head of an Arden 1-2-3.

As in race one, Piastri led from pole position to chequered flag over team-mate Alex Quinn, surviving a brief safety car period to win by 1.3 seconds in a race that was red-flagged on the last lap after a spin for Manuel Sulaiman at the final turn.

Caroline started third on the grid but made a slow getaway, allowing Ayrton Simmons to take third and Logan Sargeant get fourth.

Carlin driver Caroline held off Linus Lundqvist to finish fifth, and leave Knockhill with a championship lead of 45.5 points – which is only one point less than he took to Scotland despite Piastri’s double.

Both title contenders were unable to make much progress in the earlier third race of the weekend.

Starting sixth, one place ahead of his main rival, Caroline made a good initial start but went wide through the gravel at the final corner at the end of the first lap, dropping him to eighth behind Piastri.

Rookie Piastri later had contact with Lundqvist at the same corner that sent the Swede spinning into retirement and damaged the Australian’s front wing.

That contributed to Piastri being passed on either side at the restart by Caroline and Harry Webb, relegating him to eighth.

Oliver York won the race to score his maiden victory after passing Fortec team-mate Hampus Ericsson on the opening lap.

Sargeant snatched second from Ericsson into the hairpin following the restart to finish second, with Quinn and Simmons completing the top five. Caroline managed to get past Simmons with three minutes remaining, only for Simmons to repay the favour two laps later.

York was running eighth, just behind Patrik Pasma, early in race three when he spun. He ended up 11th after tagging Sulaiman into his spin.