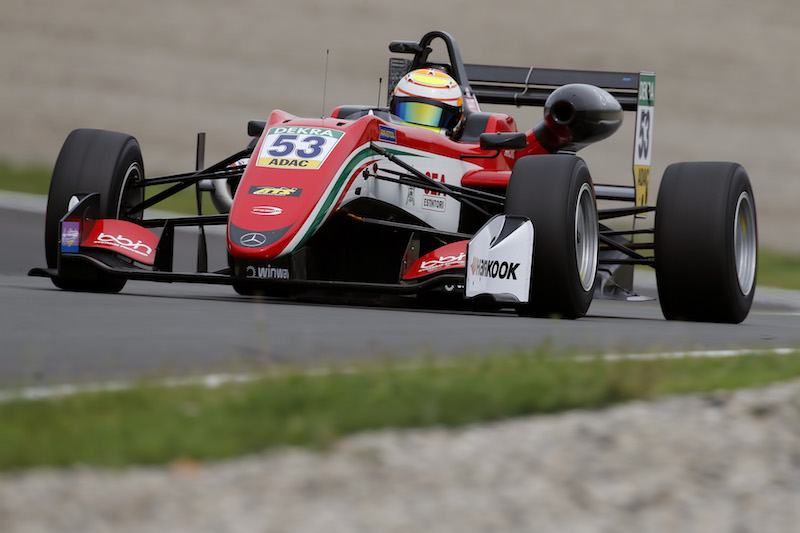 Callum Ilott returned to the top step of the Formula 3 European Championship podium for the first time since the Hungaroring round in June with a dominant win in race two at Zandvoort.

Speeding under yellows during qualifying meant 10 drivers were handed grid penalties, and this promoted Ilott from second on the grid to pole. Third fastest man Jake Hughes was promoted to second, with original pole-man Lando Norris dropping down to third.

At the start Norris immediately attacked Hughes, but locked up his front right heavily going into Tarzanbocht and had to settle for third.

Ilott was untroubled in the lead, but when Van Amersfoot Racing duo Joey Mawson and Pedro Piquet crashed near the end of the first lap the safety car was called out and Ilott?s margin over the field was wiped out.

The restart occurred at the end of lap four, and Ilott pulled off such a good restart that he was already several car lengths ahead by the time they crossed the timing beam.

From then on he was untouchable, pulling away at around four tenths per lap from Hughes and crossing the finish line 7.3 seconds up on his fellow Englishman.

Hughes equalled his best result in second, with Norris taking his sixth podium in seven races and the championship lead a further 1.4 seconds back.

Harrison Newey, another to gain from the numerous grid penalties, started fifth and finished fourth, completing a remarkable 1-2-3-4 for Englishmen and vaulting him up to ninth in the championship.

David Beckmann finished fifth, a result much needed after a crash in yesterday?s race and another incident in qualifying, with Ferdinand Habsburg holding off Maximilian Gunther for sixth place.

Prema pair Guan Yu Zhou and Michael Schumacher and HitechGP?s Ralf Aron rounded out the points, although they were all behind Jehan Daruvala before the Indian recieved a drive through penalty for a jumped start.

The six points for seventh means Gunther loses his championship lead by one point to Norris, and Ilott?s victory brings him a little closer to the front of the championship but still a disappointing 67 points off the new leader.

Between Gunther and Ilott is Joel Eriksson, who has struggled all weekend and finished a pointless 12th, meaning he now sits 20 points away from the top.