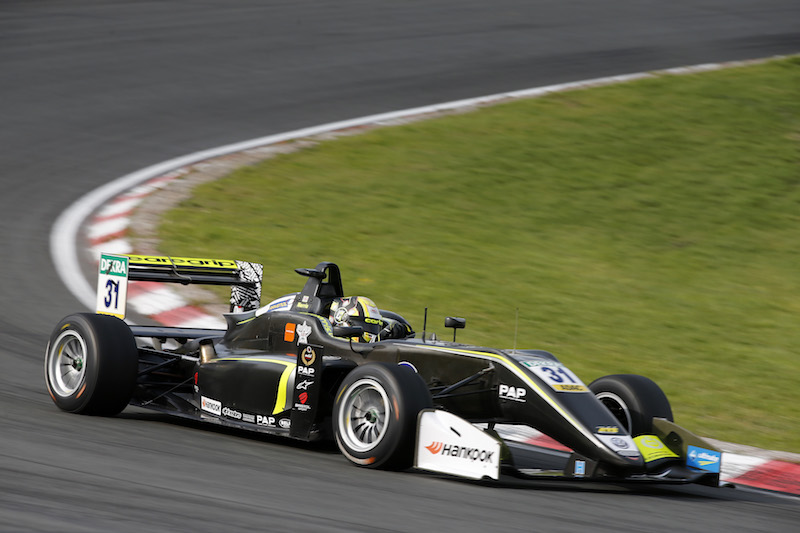 Carlin?s Lando Norris has taken his second race win of the weekend and his seventh of the Formula 3 European Championship season with a convincing race three win at Zandvoort.

Norris, starting from pole position, blitzed the start and pulled away from team-mate Ferdinand Habsburg. The McLaren prot?g? opened up a gap of six seconds in the early phases of the race, and that gap stabilised for the remainder of the 24-lap race.

Habsburg had a fairly uneventful run to his first runner-up finish of the season, some 6.646 seconds behind Norris ahead of Prema?s Maximilian Gunther and Guanyu Zhou.

Race two victor Callum Ilott had a nightmare of a race. The Prema driver started well from seventh, working his way into the top five. However he pulled into the pits at the end of lap 11 with a problem with the front wing. He would later retire late into the race.

Another driver who had a race to forget was championship contender Joel Eriksson. He did not start particularly well from 13th?on the grid, and was only able to work his way up to 12th?by the flag. He spent much of the race battling with Motopark team-mate David Beckmann.

Jake Hughes held onto fifth place in the race despite lapping well over a second slower than the frontrunners and forming a very long train of cars behind him. Pedro Piquet, who finished directly behind Hughes, did have a look around the outside of the banked Tarzan corner at the start of the lap but was unable to make a move work.

Harrison Newey finished in seventh, ahead of Ralf Aron, Joey Mawson and Nikita Mazepin. Mazepin and Aron had a long battle, which featured several attempted manoeuvres around the outside into the first corner. On a couple of occasions, contact occurred and the result of the final touch on lap 18 was the Force India junior losing out to Mawson.

Mick Schumacher finished just outside of the points in 11th, ahead of Eriksson and Beckmann.

Norris has opened up a points advantage of 11 over Gunther in the championship. Eriksson?s poor result has resulted in him dropping to 55 behind. Ilott is now over 90 points adrift following his retirement.