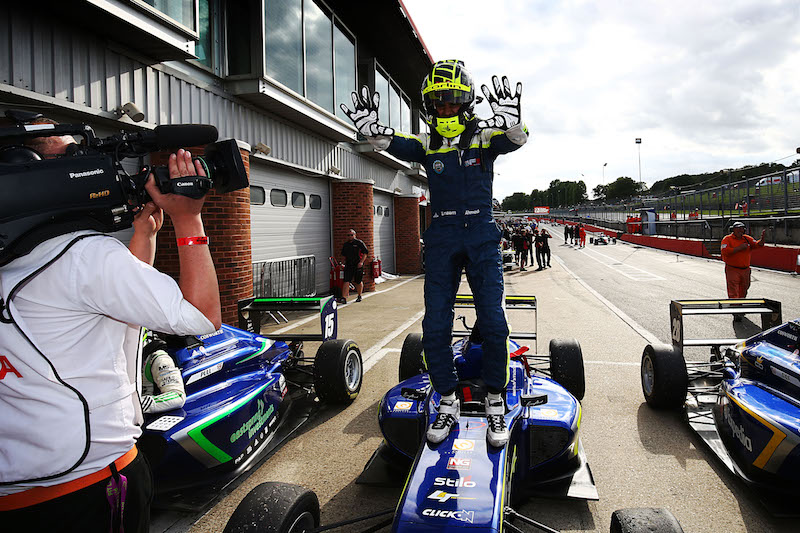 Enaam Ahmed continued his march to the BRDC British Formula 3 title with his ninth and 10th wins of the season at Brands Hatch.

The Carlin driver led the weekend’s two main races from pole position and came third in the reversed-grid encounter, and is now 106 points clear of team-mate James Pull with a maximum of 95 available from each of the remaining two rounds.

The first race was halted early after heavy rain fell with the field on slicks, causing Ben Hingeley and Cameron Das to go off into the Paddock Hill gravel trap.

Ahmed had opened up a 1.7-second lead in the first two laps but Pull, having re-passed Hingeley, was closing on him as conditions worsened prior to the stoppage.

Toby Sowery completed the podium, and he charged from sixth on the reversed-grid to win the second race on the road, only to be excluded later after his car failed scrutineering.

That handed the win to?Krishnaraaj Mahadik, taking his maiden victory in his first appearance of the season with Double R after starting on reversed-grid pole. Pull took another second place from seventh on the grid, with Ahmed third from eighth.

Ahmed led a Carlin 1-2-3 in the finale, gradually opened up a six-second margin over Das, while Pull climbed from fifth to third at the start.

Sowery struggled to get away and slipped from fourth to 12th but recovered well to come home seventh, behind Callan O’Keeffe, Hingeley and Nicolai Kjaergaard.