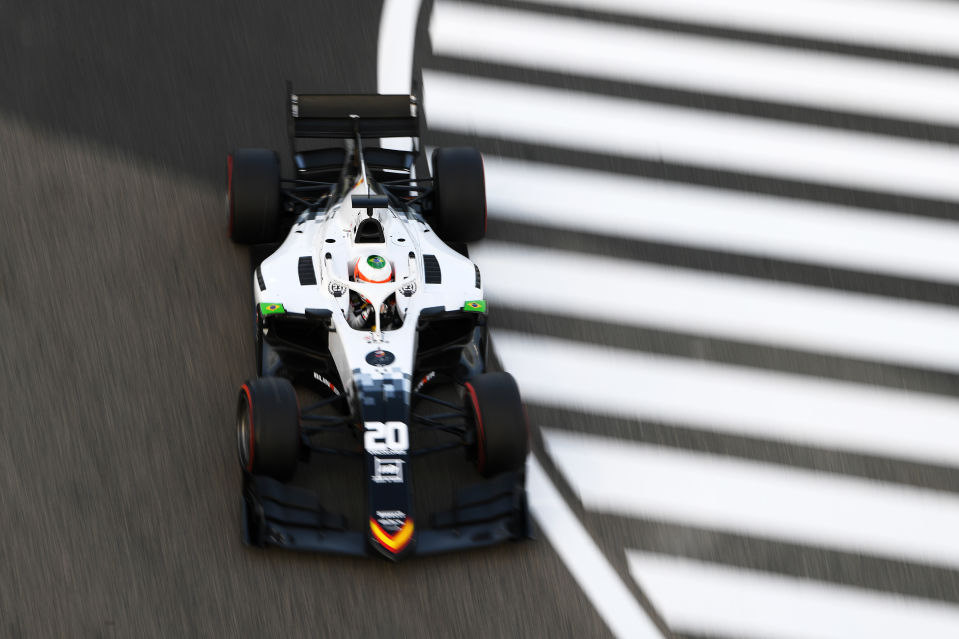 Gianluca Petecof may not be on the Formula 2 grid in Baku next month, as he searches for sponsors so he can keep his seat with Campos Racing.

The Brazilian faced budget issues through his title-winning Formula Regional Europe campaign in 2020, then was handed an exceptional opportunity to step up to F2 by Campos’s founder Adrian Campos before he passed away.

Petecof’s Bahrain debut was compromised by his in-car fire extinguisher going off in the feature race and forcing retirement, while in Monaco he set nine laps in free practice before his engine blew up. Both have been recurring issues with F2’s car.

“Regarding Monaco with the engine issue, it was something completely without warning,” Petecof told Formula Scout.

“Just driving on a straight, heard a strange noise, and then shortly after turn 1 I noticed the smoke in the back, lost the drive and had to park up. And then we saw what happened, the team was able to make an express engine change before qualifying.”

The quick turnaround by Campos enabled Petecof to qualify 10th in his group, ahead of HWA Racelab’s F2 returnee Jack Aitken, but his Friday sprint race “ended in the wall while trying to close up for an overtake” with a “stupid mistake”.

In Saturday’s sprint race he only made it to the first corner, as light contact with Trident’s Marino Sato sent him into the Ste Devote barriers and retirement. The day ended with 16th in the feature race and showing strong pace with the third-fastest lap of anyone. However it now looks like that could be Petecof’s last F2 start of the year.

“Regarding Baku, the team did everything they could to allow me to race in Monaco already, it was a big push from their side, and from my side we haven’t had any success whatsoever in the sponsor search,” he explained to Formula Scout.

“We have been working non-stop since the end of the season last year, and we still weren’t able to officialise anything, and that put us in a very difficult position.

“So there’s still a low probability of something working out, but I’m pretty light-hearted, I’m not really pressured about it. I think if at this stage we have to do a step to the side and re-evalute things, it’s not going to be the end of the world. We’ve seen that happening with many drivers in the past, and them turning out to have really successful careers in motorsports.

“So that is my main target now. I think at one point you have to also look at it as what I want to do for my life. And there are many possibilies, many alternatives that I can take to make that happen.”

While it was a difficult weekend for Campos having to work with car issues and a crash, it did vault up to eighth in the teams standings as Petecof’s team-mate Ralph Boschung scored in all three races.