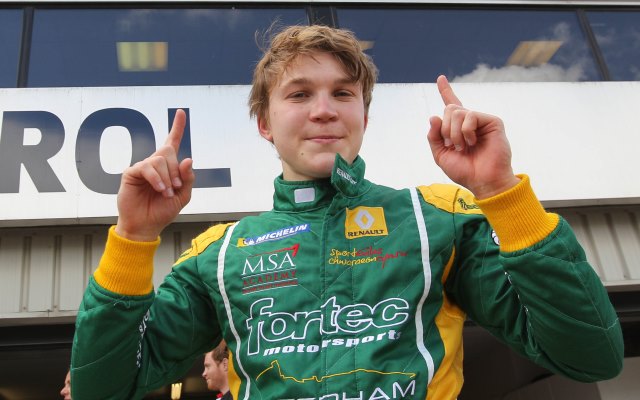 Revealed as the winner at the annual Autosport Awards in London, 19-year-old Parry was chosen after an assessment at Silverstone in Formula Two, Mercedes DTM and McLaren GT cars. He wins a test in a McLaren F1 car as well as ?100,000, full BRDC membership and an Arai helmet.

“It’s fantastic,” said Parry upon receiving his award. “Absolutely amazing. I don’t know what to say.

“I feel I did the best I could and obviously the last couple of months I’ve been thinking about what I can do better, and I just thought I couldn’t have. It’s massive. From here we’re hoping to do Formula Renault Eurocup with Fortec again, they’ve been fantastic for me.”

After a promising karting career that saw him finish up as National Rotax Max Junior champion in 2010, Parry contested his first season of cars in Formula Ford but struggled in his Van Diemen against the rival chassis Mygale and finished eighth in the standings. He switched to the Intersteps series for Formula BMW cars in 2012 and won the title with 13 wins from 23 races.

It was this year that the Caterham-backed racer really emerged as a star of the future, scoring pole positions and podiums on his Formula Renault debut at Hockenheim against a host of regulars from the Eurocup. He then claimed a double win against similarly tough competition at the Nurburgring before two wins on home soil at Silverstone bolstered his already-strong advantage in the title race. He only managed one more win at Spa but secured the championship at the final weekend.

He is now set to continue following the path of last year’s Award winner?Jake Dennis and follow up his Intersteps and NEC successes with a switch into the Eurocup.