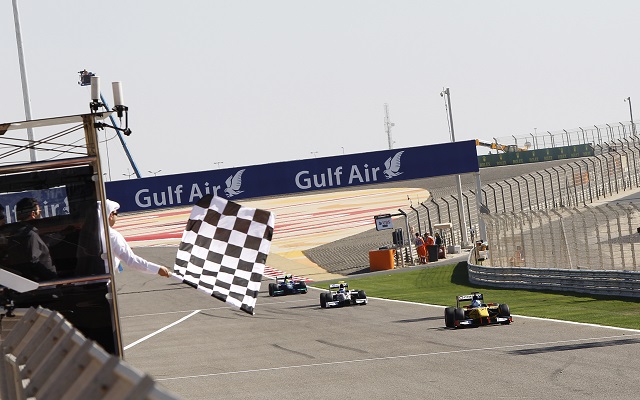 Jolyon Palmer leads the GP2 standings after the opening weekend of the 2014 season following a controlled victory in the Bahrain sprint race.

Felipe Nasr started on the reverse grid pole position, but ruined his chances of finally winning a GP2 race at the 46th attempt by getting an awful start.

Fellow front-row starter Simon Trummer moved into the lead, but was overtaken by Palmer into turn one on the second lap.

The DAMS driver was followed throughout the remainder of the race by Trummer and Julian Leal, but managed to keep the lead until the chequered flag.

Trummer’s podium was his first since International Formula Master in 2009, while Leal’s third place followed his second from the feature race. As a result, he is a surprise second in the standings, ten points behind Palmer.

While the top three held station, there was plenty of movement behind that in the closing stages. Having managed his tyres, Nasr was able to catch the fast-starting Adrian Quaife-Hobbs and pass him for fourth. Palmer’s team-mate Stephane Richelmi also found a way past the Briton before the end to claim fifth.

Mitch Evans salvaged some points from the weekend in seventh with Rene Binder claiming the final point ahead of Arthur Pic. The Campos driver’s promising debut weekend ended on a low point after being hit by Richelmi when trying to pass Quaife-Hobbs, causing him to fall to ninth.

German F3 graduate Artem Markelov impressed with his progress during the race, finishing in tenth.

Stoffel Vandoorne came crashing down to earth following his superb debut win on Saturday, first making contact with Daniel De Jong and then receiving a hit from Markelov during the first lap. Meanwhile, Racing Engineering pair Stefano Coletti and Raffaele Marciello both stalled at the start.