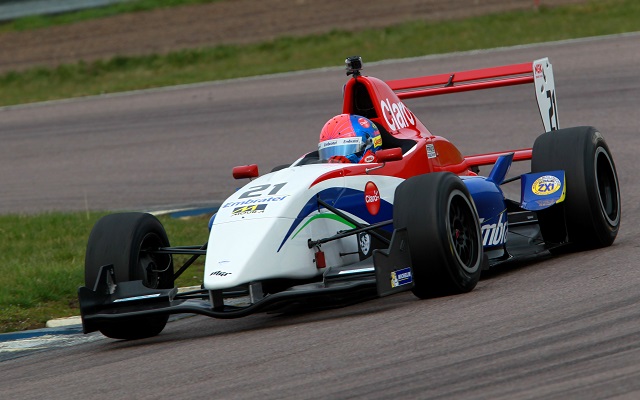 Pietro Fittipaldi, grandson of two-time F1 champion Emerson, was victorious today at Rockingham in the first race of the 2014 season of Protyre Formula Renault.

Having started the race in second, the 17-year-old Brazilian took advantage of a mistake from pole-sitter Matteo Ferrer on the opening lap which saw the Italian drop to fifth.

Following the start, Alex Gill picked up second and followed Fittipaldi closely throughout the race, but a puncture on the penultimate lap of the race saw the Brit denied a surefire podium.

As Fittipaldi cruised to the checkered flag, it was Piers Hickin?who inherited second place, despite coming under serious pressure at the end of the race from the charging Ferrer, who completed the podium.

Colin Noble, Jr. started from fourth but wound up losing three places during the course of the first lap. However, he would be fourth at the finish line, having mounted a solid recovery drive.

Ferrer will start both of tomorrow’s races from pole.