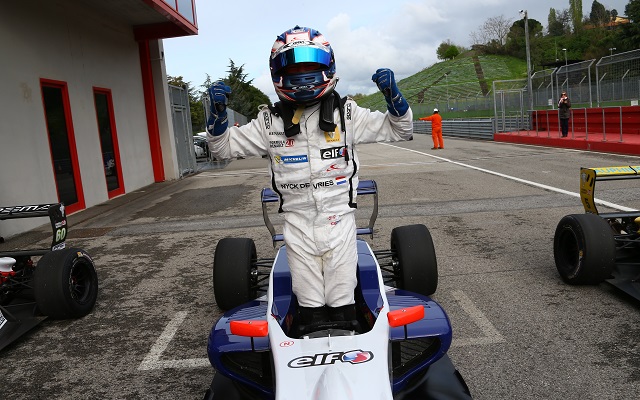 De Vries got a good start from pole position and kept the lead from fellow front row starter Bruno Bonifacio. The Brazilian the began to drop back over the course of the first lap and then slipped back to third behind Simon Gachet after briefly losing the car on corner exit.

The Dutchman kept increasing his lead with every lap and comfortably set the race pace out in front, soon pulling away by more than five seconds. Behind him, Gachet kept Bonifacio at bay throughout the opening laps, with the Brazilian taking P2 back on lap six.

The race was completed without interruptions and, nearly 28 minutes after the start, de Vries comfortably crossed the finish line in first, with Bonifacio coming to the flag seven and a half seconds later. Gachet slipped back towards Jack Aitken, but held on to third, picking up his second podium of the weekend.

After the Imola opener, de Vries leads the standings, having picked up the maximum available amount of points in 50. With the likes of Bonifacio, Aitken and Villemi entered as wildcards and ineligible for points, second place is occupied by Gachet with 36 points. Russell, Tang and Morris round out the top five with 25, 24 and 23 points respectively.