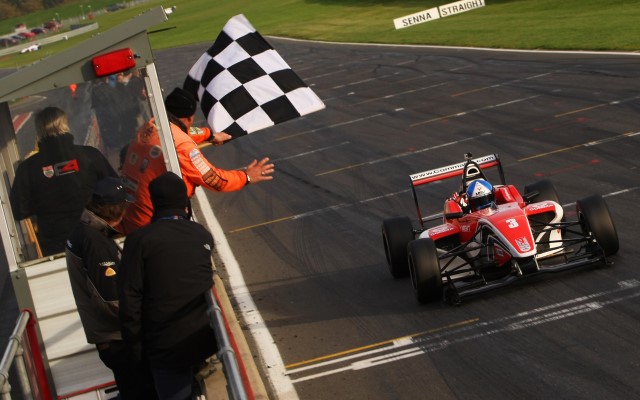 Will Palmer doubled up on the first day of the BRDC F4 Winter Championship at Snetterton with a win from pole position in race two.

Starting from head of the grid after setting the fastest lap in race one, the HHC Motorsport driver opened up a 4.648 second margin over rival Gaetano di Mauro in the 10 lap race.

“It’s been a great start to the Winter Championship for us,” said Palmer, who has given himself an early 12-point lead in the eight-race series.

“I knew I had the pace. I knew that if I could get off the line in the lead I would be able to pull away and take the win.”

Di Mauro is confident going into Sunday’s two races: “I’ve got the pace to win this weekend. Tomorrow could be wet so that could be a good chance for us, and I’m quick in the wet.”

Connor Jupp ran third for the first seven laps, but then succumbed to pressure from Jordan Albert as the SWR driver stole the final podium spot.

BRDC F4 debutant Harrison Newey was again on the pace of some of the more experienced runners ahead of him and took a second fifth place finish, in front of race one podium finisher Rodrigo Fonseca.