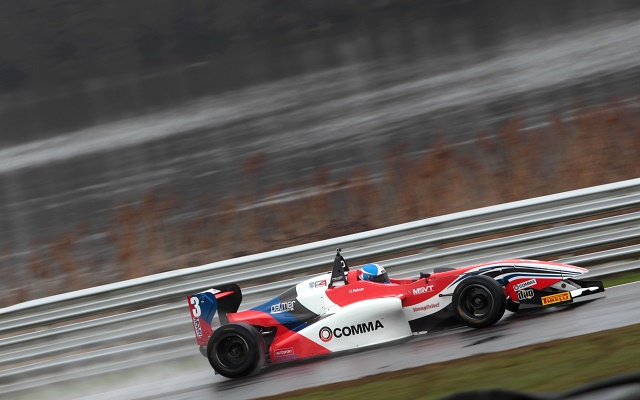 Will Palmer extended his BRDC F4 championship lead by winning the final race at a soaking Snetterton, which saw an HHC 1-2 at the checkered flag.

The HHC driver was into the lead off the line, sneaking past front row starters Omar Ismail and Harrison Newey, the latter losing two positions from pole.

Newey soon retook the spot from Ismail and started to close in on Palmer. The gap soon increased though, and Palmer finished seven seconds in the clear.

After losing places by cutting the final turn early on, Ismail recovered to fifth, followed by Jack Lang and two big movers – Rodrigo Fonseca, who started 17th, and Santiago Urrutia, who was dead last on the grid.

Sisa Ngebulana and Chris Mealin?completed the top ten, both of them losing out in a spin in the beginning.

Jordan Albert’s race ended prematurely as a result of contact with Newey at T1 during the first lap.