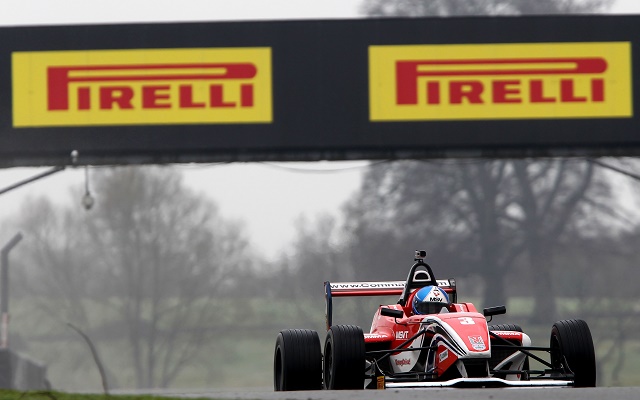 BRDC F4 pre-season favorite Will Palmer led an HHC Motorsport 1-2 in the qualifying session for the season opener at Oulton Park.

Palmer secured his first qualifying pole in the series, narrowly besting teammate Harrison Newey in the final seconds of the running.

The eventual poleman led from the get go, holding the top spot when the session was first interrupted six minutes in. The red flag came from an incident for potential contender Jordan Albert, who damaged the rear of his car and ground to a halt on-track.

Palmer ramped up the pace after the restart, but was soon dethroned by Newey. Over the next minutes, the HHC duo exchanged spots multiple times, leaving other teams with little chance to enter the fight for pole.

Newey returned to the top spot in the penultimate minute, but Palmer snatched it back. He picked a good time to do so, too, as, several seconds after his latest lap put him first, Jack Lang brought out the red flag that ended the session a minute early.

Hillspeed’s Sebastian Lanzetti prevailed in the battle to be best of the rest, claiming third for his first British race. Tom Jackson was fourth, while newcomers Ciaran Haggerty and Jack Bartholomew completed the top six, the latter finishing as the top driver for reigning champions Lanan.

Another Lanan racer Chris Mealin was fourth when he hit the pits with two minutes to go, but ended up shuffled down to seventh. Rodrigo Fonseca was right behind his teammates in eighth, with HHC’s third man Sisa Ngebulana and Fernando Urrutia completing the top ten.