PaddockScout.com guides you through the best of the weekend’s action, featuring the Formula 3 Euro Series races at the Nurburgring and the latest round of Formula Renault UK at Snetterton…

The sixth race weekend of the Formula 3 Euro Series season took place at the Nurburgring in Germany, and in qualifying on Friday it was Daniel Juncadella who came out on top. The 20-year-old Spaniard claimed pole for the third race of the weekend with the fastest lap of the session, and also had the quickest second-fastest laptime (if that makes sense) to give him pole for the first race. The grid for the second race, as always, would be decided by reversing the top eight results from the first encounter.

In the first race, Juncadella was unable to turn his pole into victory. His compatriot, Prema teammate and championship leader Roberto Merhi took the lead away from him on the opening lap and romped away to victory. Juncadella finished behind him in second place, while Sweden’s Felix Rosenqvist held off his Mucke teammate Nigel Melker to complete the podium in third. Behind the Prema duo and the Mucke pairing, Signature team drivers Laurens Vanthoor and Marco Wittmann came home fifth and sixth. Canadian Gianmarco Raimondo and Japan’s Kimiya Sato completed the top eight.

Merhi began the second race from eighth on the reverse grid, but that wouldn’t stop him taking another win. The 20-year-old worked his way into second place through the opening sequence corners in light drizzle, and inherited the race lead when Melker served a drive-through for jumping the start. Merhi held on to win despite the rain getting heavier, making his seventh visit to the top step of the podium this season. Rosenqvist came home in second ahead of Vanthoor. Having started on wet tyres, Kuba Giermaziak, fresh from a win in the Porsche Supercup last weekend, rose as high as fourth, before dropping backwards on a drying track. Juncadella finished fourth, ahead of Sato who fell off the track at the first corner after starting from pole. Melker, Daniel Abt and Carlos Munoz completed the top eight.

Juncadella managed to get the better of Merhi in Sunday morning’s race and be the man to complete a clean sweep for the Prema team. Starting from pole, he kept Merhi at bay as the Spanish duo rode away from their rivals. Melker beat Rosenqvist to the final step of the podium, with the Signature quartet of Vanthoor, Wittmann, Abt and Munoz filling the next four places.

Juncadella moved up to second in the standings with victory in the third race. Photo: F3 Euro Series

Merhi’s lead now stands at 64 points, with Juncadella’s victory having moved him into second place. A poor weekend for Wittmann leaves him third, just ahead of Melker. There are three weekends remaining, with the next race being at Silverstone on 10/11 September in support of the Le Mans Series race there.

The Formula Renault 2.0 UK Championship, to give it its full title, resumed at Snetterton this weekend after its summer break.

Fresh from impressing in the FIA Formula Two Championship over the break, Jordan King claimed his maiden pole position in the series for the first race. The 17-year-old looked set to convert that into a first victory in the category, having kept championship leader Alex Lynn at bay for the duration. However, on the penultimate lap Lynn made a move for the lead but hit King, spinning him round and into retirement. Lynn would recover to finish third, as his main title rival Tio Ellinas of Cyprus inherited the victory ahead of Atech Reid teammate Jack Hawksworth. Behind Lynn came Oliver Rowland, Daniel Cammish and guest driver Felix Serralles. 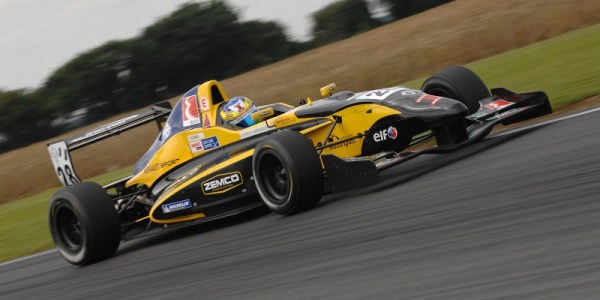 Ellinas inherited his second win of the year in the first race. Photo: Chris Gurton Photography

Lynn fought back in the second race, leading from pole position until the checkered flag to score his ninth win of the season. Fortec teammate and Eurocup regular Will Stevens came home second, helping Lynn out by restricting Ellinas to third. Alice Powell scored her best result of the year in fourth, ahead of Josh Hill, son of Damon, who came out on top of a fierce battle with Cammish, Rowland and King.

Lynn maintains his healthy lead in the standings, 56 points ahead of nearest rival Ellinas. Rowland holds third ahead of Hawksworth and Hill. The next round takes place as part of the World Series by Renault round at Silverstone on 21 August. 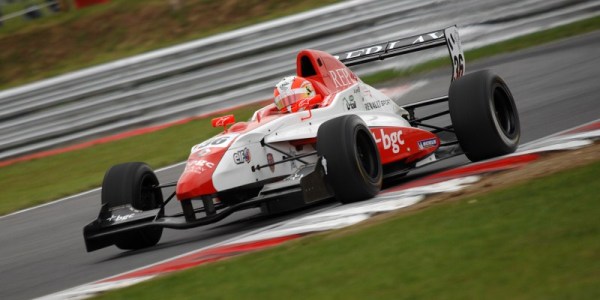 Lynn maintained his advantage in the standings with his race two win. Photo: Chris Gurton Photography

Driver of the weekend: Roberto Merhi – Another fine performance from the Spaniard with two wins and a second-place, bringing him closer to wrapping up the Euro Series title. And don’t bet against him at the Masters of F3 at Zandvoort next weekend either.