PaddockScout looks back at another action-packed weekend of action in the junior categories, beginning with typically weather-affected GP2 and GP3 races at the legendary Spa-Francorchamps…

The support races to the Belgian Grand Prix are usually eventful affairs, and this past weekend was no exception. In GP2, rain played havoc with the qualifying session on Friday afternoon, allowing Christian Vietoris to take pole position by a whopping 1.4 seconds. He set the time on a drying track at the very end of the session, when a yellow flag in the final sector causing many to abort their laps. The German driver didn’t do the same, took pole by that massive margin and then escaped the wrath of the stewards.

Saturday’s feature race began in the dry, and Vietoris led away from the start and remained there until the rain came down again. The safety car soon came out due to one car that had spun, with a further two-car accident causing it to remain out until one lap from the end as Stefano Coletti required medical assistance. The Monegasque driver will miss the remainder of the season after sustaining compressed vertebrae when his car went over the rear of Mikhail Aleshin when the reigning Formula Renault 3.5 champion’s car slowed due to a technical problem.

This allowed Vietoris to take his second GP2 win and his first since Monza last year. Jules Bianchi was second, while Romain Grosjean wrapped up the title after climbing from seventh to third on the opening lap. His nearest rivals Giedo van der Garde and Charles Pic both failed to finish with weekends to forget.

Luca Filippi was fourth, ahead of series returnee Brendon Hartley who scored the Ocean team’s first points of the year in his first race for them. Dani Clos, Josef Kral and Fairuz Fauzy completed the points with the latter two then having their positions swapped by the stewards after a minor overtaking discrepancy under the safety car.

Kral began the Sunday morning sprint race from pole and kept the lead until a safety car period midway through the race, which allowed Filippi to catch him. He wasted no time in getting by after the restart and took his second win from three meetings with the Coloni team. Kral succumbed to Bianchi before the flag, with the Frenchman taking another second place to boost his chances of getting the runner-up spot overall.

Grosjean was fourth, ahead of Sam Bird who charged through the pack to fifth after the safety car. Clos took the final point in sixth place. The season finale takes place at Monza in two weeks’ time.

Driver standings after 8 of 9 rounds: 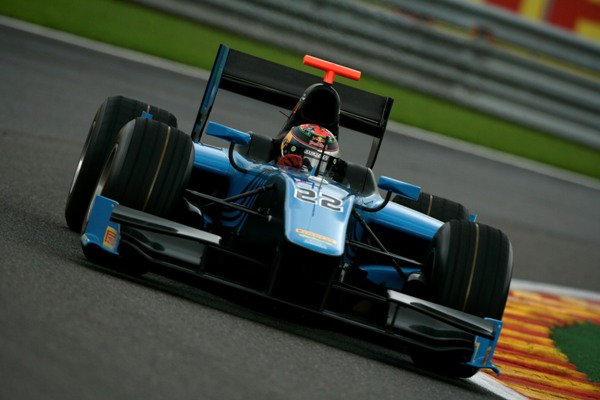 Brendon Hartley showed his skills with a points-scoring return to GP2, driving for a team who were yet to score a single point in 2011. Photo: GP2 Media Service

In GP3 the ART team dominated the weekend. James Calado defeated teammate Valtteri Bottas in anotherdrying-track qualifying session on Saturday morning, but the tables turned at the start of the first race that afternoon. Bottas drove around the outside of Calado at La Source, and drove off into the distance to record his third win from four races. Calado was second while Nigel Melker came out on top of a scrap with Adrian Quaife-Hobbs for third place.

Conor Daly came across the line in fifth, ahead of Tom Dillmann and Nico Muller. Richie Stanaway, making his series debut this weekend with ART having dominated the German F3 Cup so far this year, scored the final point in eighth having qualified 18th on the grid.

This handed him pole position for Sunday morning’s second race, and although he lost out to Muller off the line he had the lead back again by the end of the opening lap. He took a comfortable victory, as Calado stormed his way through to second place. Muller was third, ahead of Michael Christensen, Simon Trummer and another debutant, Alex Fontana.

Bottas had been following Calado through into fourth place, before a technical problem dropped him down the order. His no score allows Calado to close within five points ahead of the season finale at Monza. Melker, Alexander Sims (who suffered a point-less weekend) and Quaife-Hobbs are still mathematically in with a chance of the title, but realistically it’s down to the ART duo.

Driver standings after 7 of 8 rounds: 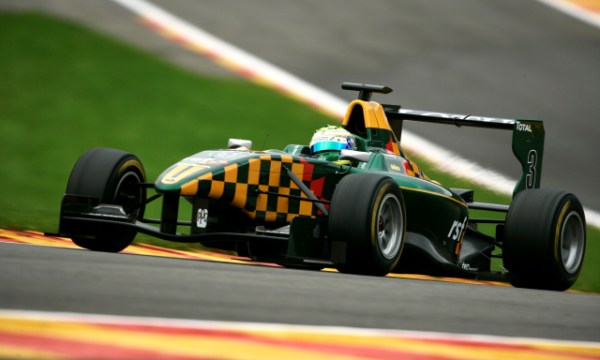 We're not sure whether having a livery that matched the circuit colours had something to do with it, but James Calado took two second places to become Bottas' main title rival. Photo: GP3 Media Service

Away from Spa, the sixth round of the FIA Formula Two Championship took place at the Red Bull Ring in Austria, with Ramon Pineiro taking a double victory. Having claimed his maiden win last time out at Brands Hatch, the Spaniard put his flourescent yellow car on pole for Saturday’s race. He pulled away from championship leader Mirko Bortolotti to record a comfortable victory. Behind Bortolotti, Mihai Marinescu picked up his maiden podium in the category, ahead of Alex Brundle and Jack Clarke. Bortolott’s nearest title rival Christopher Zanella started from third but lost a few places early on before a drive-through penalty for exceeding track limits demoted him to 12th.

Bortolotti initially took pole on Sunday morning, only to be penalised for blocking another driver. He fell to third, handing pole to Zanella and second to Pineiro. Zanella once again ran wide on the opening lap, allowing Pineiro through. Bortolotti kept on his tail for the rest of the race but Pineiro claimed his third straight win. Marinescu was once again on the podium, ahead of Zanella and Kelvin Snoeks.

Bortolotti has stretched his lead to 60 points over Zanella, with the Italian only needing to leave his home race at Monza with a lead of 51 points to wrap up the title before the season finale in Barcelona.

Driver standings after 6 of 8 rounds:

This was just about the only view anyone got of Pineiro in the races in Austria. Photo: FIA Formula Two Championship

Supporting F2 in Austria was Formula Abarth, with two races counting towards the European series classification. Russian teenager Sergey Sirotkin won the first race ahead of Patric Niederhauser, with the pair reversing their positions for the second race. Sirotkin holds a 26 point lead over Niederhauser with three race weekends remaining in October, two of which also count towards the Italian championship that Niederhauser leads.

Finally, the penultimate weekend of the Formula Renault North European Cup took place at Most in the Czech Republic. One win and two second places were enough for Carlos Sainz Jr. to seal the title, despite fellow Red Bull Junior and nearest rival Daniil Kvyat winning the other two races and coming second to Sainz in the other race. Stoffel Vandoorne, Jordan King and John Bryant-Meissner shared the podium with the Red Bull duo in one race each. The season finishes outside of what you could consider ‘North Europe’ to be, at Monza in Italy on 24/25 September.

Driver of the weekend: James Calado – His teammates may have won the two GP3 races at Spa, but Calado’s double second-place was enough to make him Bottas’ only realistic rival heading to Monza.