PaddockScout looks ahead to a bumper weekend of action, featuring GP2, GP3, Formula 2 and Formula Renault…

The GP2 Series resumes after a four week break for the final two rounds of the season at Spa and then Monza in two weeks time. Having runaway with the series lead in recent rounds, Romain Grosjean can wrap up the title this weekend, so long as his 25 point lead in the standings doesn’t shrink to below 21. Having not finished off the podium since the feature race at Silverstone (where he was fourth!), it will probably take some kind of disaster for that to happen.

His nearest rival is Giedo van der Garde, still chasing a first victory this season, with Addax teammate Charles Pic only seven points behind the Dutchman. Other drivers likely to be in contention this weekend are Jules Bianchi and Luca Filippi.

There is one driver change for the weekend, with former Red Bull Junior Brendon Hartley replacing Kevin Mirocha at Ocean Racing Technology. The Kiwi has struggled to match expectations in Formula Renault 3.5 since finishing runner-up to Jaime Alguersuari in British F3 in 2008, and budget constraints have prevented him from holding down a full-time seat in GP2.

GP2’s baby sister GP3 returns as well this weekend, with the destination of the title far less clear. With four podiums and two wins from the last four races Valtteri Bottas has got himself into the points lead after a slow start. However, the Finn has four drivers within 10 points of him, and another two just three points further behind, with 40 points still up for grabs before the checkered flag falls at the end on the Sunday morning at Monza.

Alexander Sims had led the way until a double non-score in Hungary caused by an exclusion from the first race saw slip to second place, seven behind Bottas. Two points behind him is Nigel Melker, with British duo Lewis Williamson and James Calado just one point further behind. Mitch Evans and Adrian Quaife-Hobbs are both still well in contention. 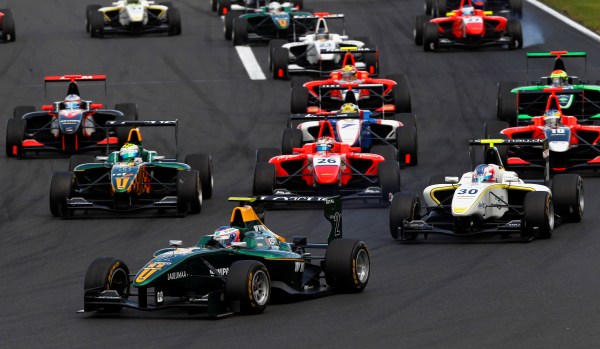 Bottas leads the GP3 standings, but has a number of drivers on his tail. Photo: GP3 Media Service

Three drivers make their GP3 debuts this weekend. The most exciting prospect is Richie Stanaway, the New Zealander currently dominating the German F3 Cup. He replaces the lacklustre Pedro Nunes at ART. Also in are European F3 Open points leader Alex Fontana, replacing Vittorio Ghirelli at Jenzer, and Daniel Mancinelli, who was fourth in Italian F3 last year but has found things tough in 2011 since winning the season opener. He replaces Luciano Bacheta at Mucke. More about the Briton in a bit.

The FIA Formula Two Championship also resumes after its month break, racing at the recently-reopened Red Bull Ring at Spielberg in Austria. Mirko Bortolotti holds a healthy lead in the standings, courtesy of being the only man consistently at the sharp end so far. However, a particularly rough weekend for the Austro-Italian will be enough to bring other drivers back into the frame. Christopher Zanella was off the pace last time out at Brands Hatch, but will hope to trim the 36 points gap to Bortolotti.

Miki Monras hasn’t been on the podium since winning at the season opener at Silverstone, and has fallen away from Bortolotti as a result, although he is still third overall. Jack Clarke and Ramon Pineiro will both hope that their maiden wins at Brands Hatch will relaunch their seasons, neither of which had lived up to their expectations until then.

We said we’d mention Luciano Bacheta again. Well he’s made a swift move across to F2 for this weekend. Another series debutant will be Rene Binder. The Austrian may be racing at home, but with his unspectacular record in the German F3 Cup don’t expect heroics in this one-off appearance.

Supporting F2 in Austria will be Formula Abarth, with the races counting towards the European classification in the Italian-based series. Russian Sergey Sirotkin (who only turned 16 today!) extended his points lead with a win last time out at Spa. Keep an eye out too for his nearest rival Spaniard Gerard Barrabeig and Ferrari Driver Academy member Nicolas Costa of Brazil.

Finally, the penultimate weekend of the Formula Renault North European Cup takes place in the Czech Republic, where the title can be decided in favour of Carlos Sainz Jr. Rather than racing at Brno the series supports the Truck Grand Prix at the Most circuit. A double win for Sainz at Zandvoort gave him a 104 point lead over fellow Red Bull Junior Daniil Kvyat. All he needs to do to wrap up the title is keep that advantage above 90 points.