While experienced campaigners led the way in the first race of the GP2 season in Malaysia, it was the turn of three rising stars in Race 2…

The leading names on the GP2 grid set out their stalls for the season ahead at Sepang. In an extremely close qualifying session on Friday we saw the top five drivers covered by just a tenth of a second. Series veteran Davide Valsecchi followed up his strong pre-season form with pole, ahead of Luiz Razia, Max Chilton, Fabio Leimer and Stefano Coletti. Meanwhile, expected title contenders Esteban Gutierrez and Marcus Ericsson could only managed 15th and 20th respectively.

Razia got the jump on a poor-starting Valsecchi at the beginning of the Saturday feature race, and went on to take a comfortable win. It was only the second ever main series win for the fourth-year driver, and his first since his rookie year in 2009. Fifth-year driver Valsecchi recovered to second, while Chilton began his third season with a maiden podium finish ahead of Leimer and Coletti.

Just behind Coletti was Felipe Nasr, making a highly impressive debut performance to finish sixth. The top eight was concluded by Lotus teammates Gutierrez and James Calado – the latter holding on under pressure from Giedo van der Garde despite both his radio and water bottle not working!

Calado took pole for the reverse grid sprint race on Sunday, just as he had on his GP2 debut in Abu Dhabi last November. And just like on that occasion he controlled the race to take victory. Gutierrez and Nasr followed him home, meaning the podium was filled by the three most highly-rated drivers on the grid.

Van der Garde used a flying start to take fourth, with Razia fifth, Leimer sixth, Chilton seventh and Nathanael Berthon in eighth. Valsecchi and Ericsson were forced to retire after a coming together resulted in Valsecchi’s car entering a barrell roll.

So Razia holds the early advantage in the points on 31, seven ahead of second-placed Valsecchi, with just three points covering Calado, Gutierrez, Nasr, Chilton and Leimer from third to seventh place. It’s early days of course, but we’ve seen those likely to challenge during the year and likely to be catching the attention of the F1 teams. The season is set to resume in support of the Bahrain Grand Prix in four weeks’ time. 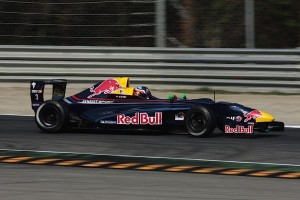 Kvyat made a perfect start to his year. Photo: Fast Lane Promotion

Elsewhere, the Formula Renault Alps campaign began at Monza in Italy, and it was the pre-season favourite for both the Alps series and the Eurocup Daniil Kvyat who took a double victory at the legendary circuit.

The Red Bull driver only qualified third for the first race, but would take the lead soon after a safety car period to win the first race of the season. Britain’s Melville McKee was second, with polesitter Paul-Loup Chatin slipping to third place. Gravity-managed Oscar Tunjo took fourth place ahead of France’s Norman Nato.

Kvyat began the second race from pole position, and took a straightforward win ahead of Chatin and fellow Frenchmen William Vermont, Nato and Esteban Ocon.

Kvyat leads Chatin in the points, with Nato third, McKee fourth and Vermont in fifth. It’s seven weeks until the next round, which will be on the streets of Pau in France.

PaddockScout Driver of the weekend: James Calado – After qualifying six and battling through the feature race in difficult conditions, the Briton kept his more experienced teammate at bay to secure a second win from just his second GP2 race weekend.

PaddockScout Index update: Plenty of new entries this week, and its double-winner Kvyat who is placed the highest in 15th, with Razia 19th, Chatin 20th and Calado 21st.