GP2 isn’t the only series getting underway this weekend, with Formula Renault Alps and Intersteps Championship both starting their second seasons…

Formula Renault Alps began last year after a merger of the Italian and Swiss championships, which between them can claim Felipe Massa, Pastor Maldonado, Kamui Kobayashi and Nico Muller amongst their champions. The 2012 season starts at Monza this weekend, before moving onto locations such as Pau, Spa and Barcelona.

After dominating the North European Cup alongside their Eurocup commitments last season, the Red Bull Junior Team and Koiranen Motorsport make the switch to the Alps series. Coming with them is Danill Kvyat, who finished runner-up in the NEC and third in the Eurocup – and thus starts the Alps season as the overwhelming favourite.

Two more Red Bull Juniors are taking part – Stefan Wackerbauer, the reigning Formula BMW Talent Cup champion, is also at Koiranen, and half-Brit half-Thai driver Alex Albon, who graduates to cars after a stellar karting career that concluded with second place in the World Karting Championship last year, who is with Epic Racing.

Koiranen have seven cars entered in total, with French F4 graduate Patrick Kujala, Gravity/Lotus F1-backed Esteban Ocon and Estonia’s Hans Villemi the men to look out for in particular.

Koiranen’s main challenge will come from Tech 1 Racing, who won the title with Javier Tarancon last year. Their attack is led by Paul-Loup Chatin, who finished third in Alps last year with Tech 1 and was also a race winner in the Eurocup. Joining him is another Gravity/Lotus driver in Oscar Tunjo, reigning French F4 champion Matthieu Vaxiviere, and Brazil’s Felipe Fraga who has been attracting the attention of Red Bull.

Others worth keeping an eye out for are RC Formula, with their French duo of Norman Nato and Aurelien Panis – who is of course the son of Olivier. Interwetten Racing also have a strong lineup, headed by Melville McKee who finished fourth in Alps last year and Brazil’s Guilherme Silva, winner of the Formula Futuro Fiat series back home last year. Simone Iaquinta also looks set to be a frontrunner with Team Torino Motorsport, having made the step down from Italian F3, as does Thomas Jager – the Austrian entering his second season of Formula Renault, this time with One Racing.

The Intersteps Championship began in the UK last year, utilising the cars previously raced in Formula BMW UK. The season begins at Oulton Park this weekend and will take in a number of British tracks during the year. 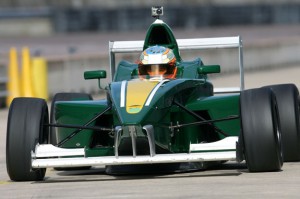 The biggest name on the entry list is that of Matt Parry, a member of the Caterham F1 development programme. He is entering his second season in car racing and makes the switch from Formula Ford. Joining him at top team Fortec Motorsport are karting graduates Cameron Twynham, Jack Aitken and Italian Mateo Ferrer.

Falcon Motorsport bring three cars, two of which will be driven by converts from the Formula BMW Talent Cup – Lasse Halminen and Liam Venter. The third car will be driven by Dubai-based Nikita Miliakov. MGR Motorsport also enter three cars, for Matt Mason, James Fletcher and Switzerland’s Jan Schwitter, who has experience of the chassis from the Formula Lista series.