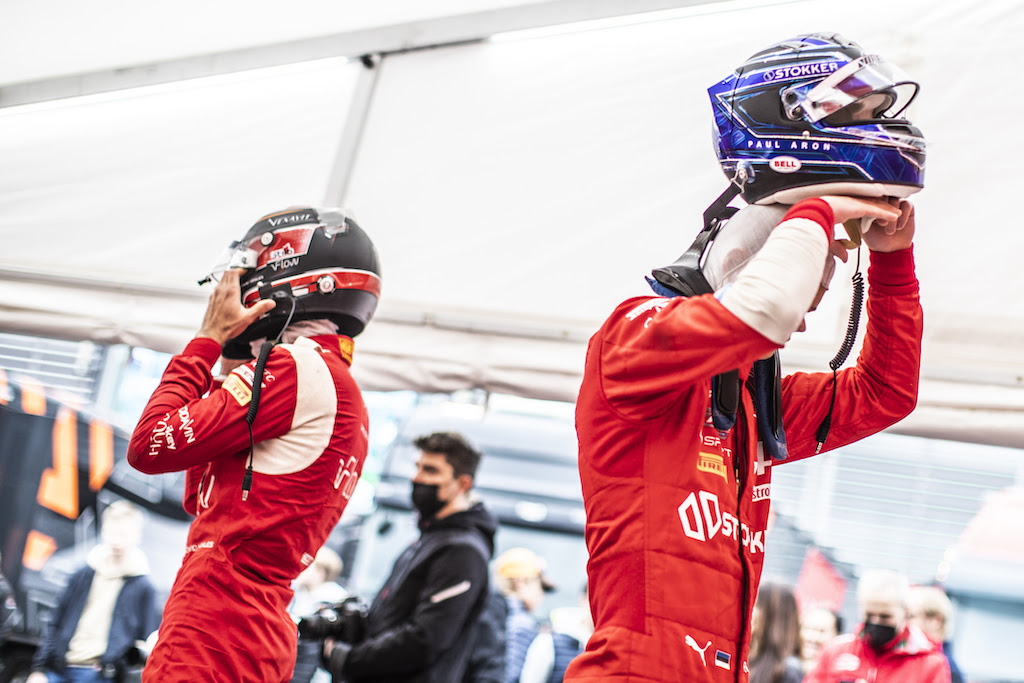 Formula Regional European Championship and Italian F4 finished their seasons at Monza. Although drivers had been crowned three weeks prior at Mugello, there were still titles to be claimed, and far more at stake

Talk was already turning to 2022, particularly for the 10 drivers (as well as the engineers, mechanics and team bosses) who headed off to Valencia after the racing for the post-season FIA Formula 3 test, but most were keeping tight-lipped about their plans. Nevertheless, a number of moves and testing line-ups became clearer over the weekend.

Undoubtedly the most memorable moment of the weekend came in the FREC finale when David Vidales went airborne at the della Roggia chicane, before crashing back to earth and torpedoing race-leading Prema team-mate Dino Beganovic.

Vidales had drawn alongside in the braking zone, but neither even came close to making the apex. Both went at near-racing speed across the kerbs and through the run-off. Beganovic managed to cross the kerbs and re-join, but Vidales caught the end of the ‘sausage’ kerbs which launched his car at an angle of 45° into the air.

Neither driver was injured, but Beganovic was disconsolate having been on course for a maiden win. In the paddock, there were few words to console him as he stood silently reliving the moment in his mind.

“I cannot begin to describe what I felt today,” the Ferrari junior commented later.

“Leading the last race of a difficult season for me, controlling the restarts, finally showing our true potential – and then to be taken out by something as bizarre as this… it’s a tough one to swallow, but I’m extremely proud of my performance this weekend. The pace has been outstanding.” 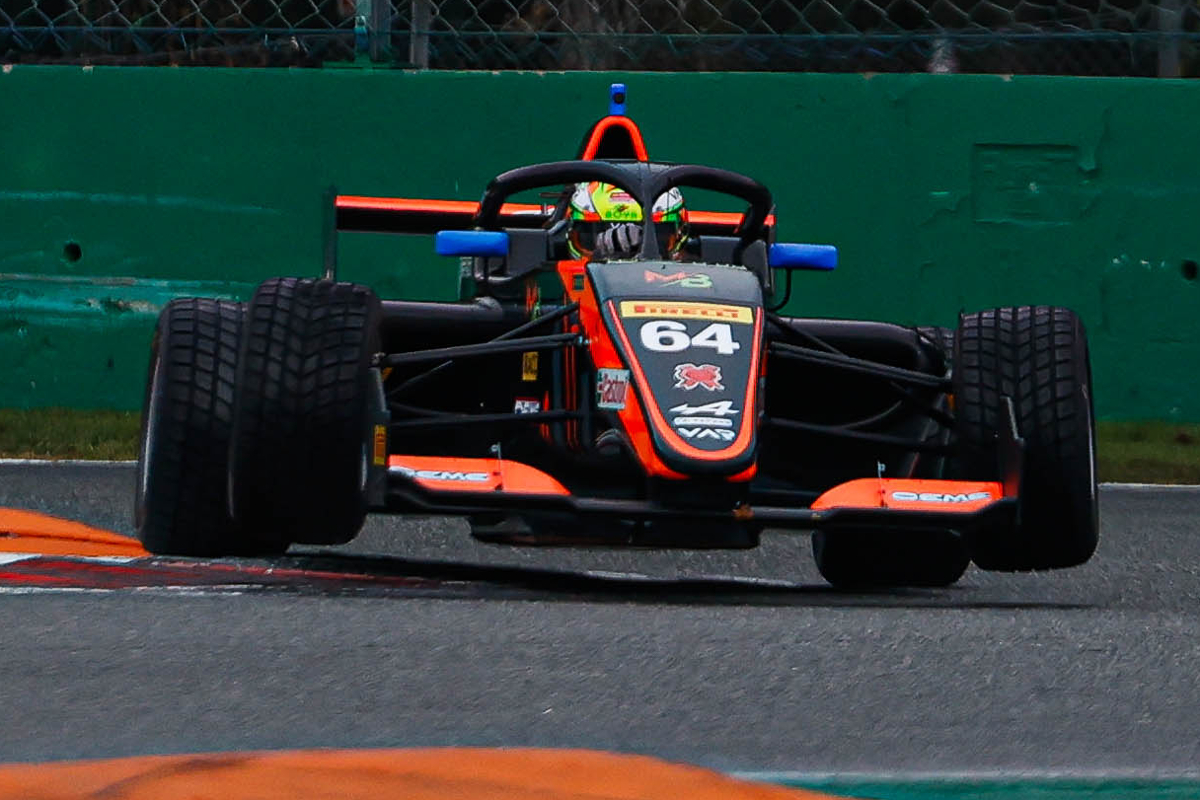 Inevitably, following the injuries sustained by Abbie Eaton and Fabienne Wohlwend in the final W Series round at Circuit of the Americas, much criticism was levelled at the sausage kerbs.

The run-off at the second chicane has raised kerbs, intended to slow the drivers down, as well as an emergency lane that runs along the outside of the asphalt and rejoins beyond the corner exit. Many drivers took to the escape lane during the weekend, gaining a clear advantage in doing so. While some were quick to give back places gained, this was far from universal.

Prema’s third driver Paul Aron rued a moment early in the same race when he used the escape road at the first chicane after being pushed onto the grass under braking by Vidales.

“Unfortunately, I got hit by my team-mate. And I’m just a bit confused as I think the team has done such a good job and it’s just kind of destroying the whole thing,” he said.

“I’m sure I could have won the race even in the beginning when it was Prema 1-2-3. I was for sure the strongest and I went for the move because in Monza it’s hard to get opportunities.”

After clinching the FREC rookie title, helping R-ace GP to the teams’ title and winning the dramatic final race, Isack Hadjar was in a celebratory mood, possibly too much as he was absent from the first FIA F3 session on Monday morning…

Following a difficult qualifying session on Saturday, Hadjar had cut a more forlorn figure. His aim “was to finish in the top three” in championship. There were 50 points left to score, he was 46 away from the top three, and sixth on the grid.

“Now I can hope for top four maybe,” he added. He won Sunday’s race, but ended up fifth in the standings. 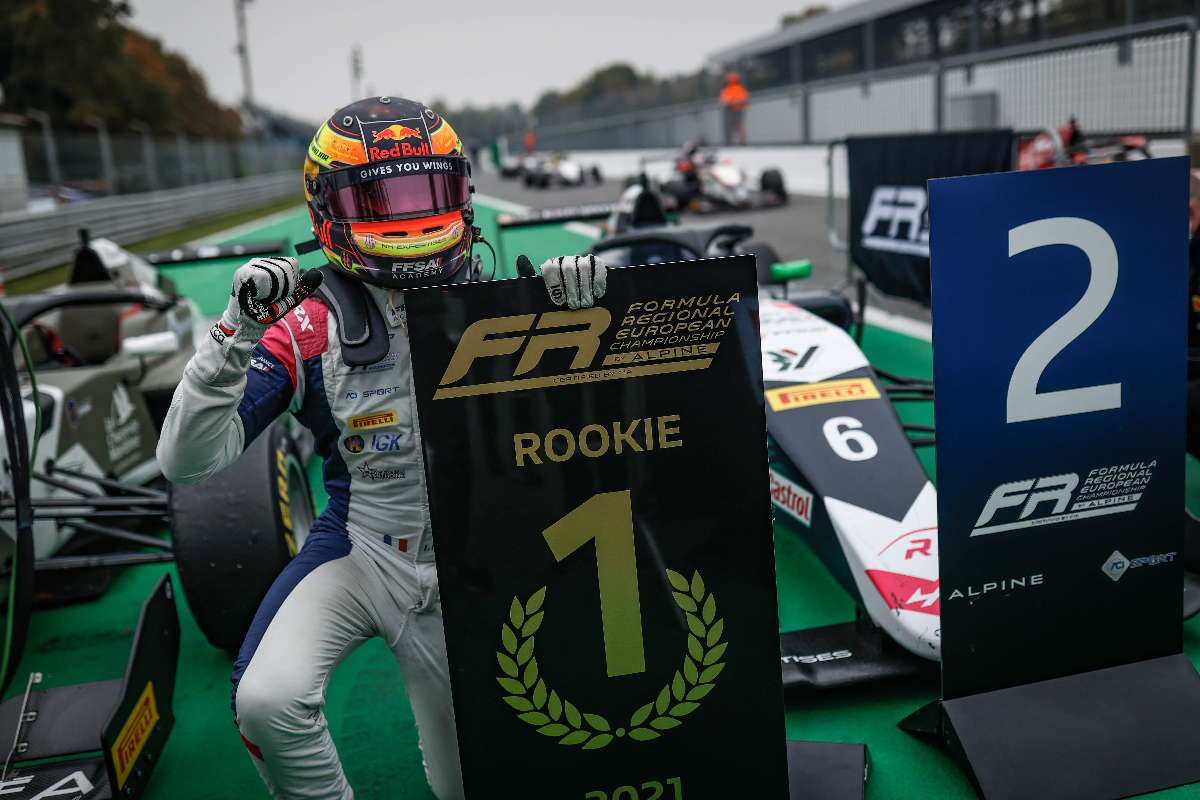 Hadjar was able to confirm to Formula Scout that his deal to join the Red Bull Junior Team for 2022 “is official, it’s been official since mid-season” after previous denial over the announcement he made in June.

The Frenchman said that he would be a full junior next year (rather than RBJT-supported driver status), although he felt that “Red Bull doesn’t even look at the championship; obviously it was because of [winning in] Monaco”. Furthermore, his F3 deal for next year “is fixed”. He tested at Valencia Ricardo Tormo with Hitech GP in a car in full Red Bull livery, normally used only for drivers with full RBJT status as otherwise they would remove brand stickers and leave the base colours.

Red Bull has remained tight-lipped since Hadjar’s supposed signing, while the reports that announced it have been removed from the internet, and it’s believed there is no active contract with Hadjar for the brand to comment on. He already races with a Red Bull helmet though, and is all but confirmed to appear in the annual reveal of the RBJT line-up next January.

The F4 rivalry that could go on for years

Ollie Bearman finished his stellar Italian F4 campaign on a high by taking three wins at Monza, in the process ensuring that Van Amersfoort Racing reclaimed the teams’ title by 102 points from Prema. His battles in all three races with Prema’s Andrea Kimi Antonelli were potentially a foretaste of the years to come as the two progress up the ladder.

Antonelli is, of course, already a Formula 1 junior with Mercedes-AMG. And Formula Scout’s sources suggest Bearman is very likely be signing with Ferrari for 2022 after contesting its Scouting World Finals last month.

“I’m really happy to be with them because, especially in these races, they are not putting any pressure on me so I can enjoy as much as I can,” said Antonelli of his Mercedes patronage. “They know how to manage their driver and I hope to have a long way with them” 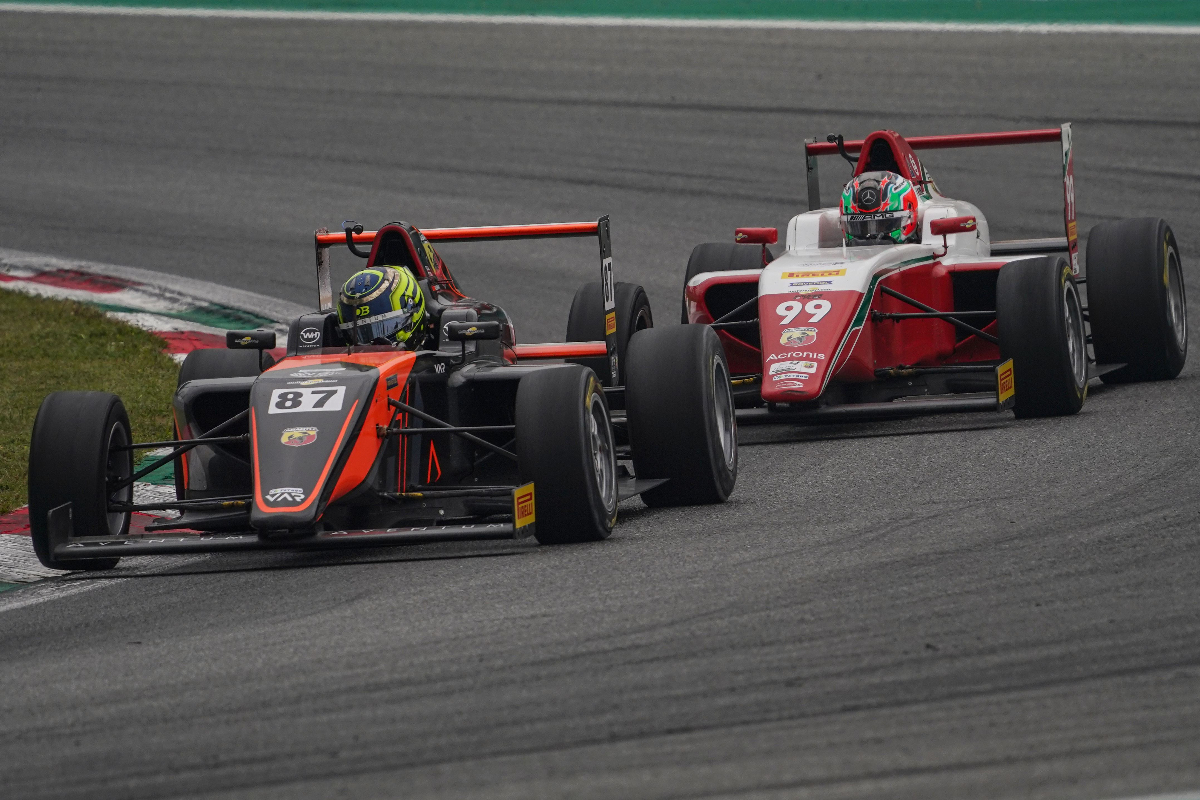 Bearman’s wins were particularly impressive considering that they came in a variety of weather conditions – dry, wet and slippery – and from second, sixth and eighth on the grid. He missed the pre-event Thursday test due to being at Silverstone for the on-track Aston Martin Autosport BRDC Award assessments, but quickly up to pace in Friday morning’s practice.

His trademark strong starts, as well robust racecraft saw him leading both the first and third races by the end of lap one.

“The first lap is obviously difficult because you want to brake as late as you can, but you also don’t know where the braking point is and how wet it is, or if your brake bias is right. When I broke for turn one on the first lap, the rear tyres were just static. So that was a bit sketchy but I was just building confidence every lap,” he admitted.

There “a few moments” more on that lap, including going “fully sideways” when braking for the final Parabolica corner.

“We showed this car is dominant in all conditions, and we put it together even without the most power or the most top speed which is everything in Monza,” Bearman added, a reference too to his engine-related top speed deficit at Mugello.

Antonelli was perhaps even more impressive, as he led Prema’s attack and became the first of its drivers in 2021 to make the podium in every race of a weekend – in just his third weekend of car racing. Bearman stood in the way of a first win though.

The first podium for Antonelli came in race one, as he finished just 0.320 seconds behind Bearman in second place.

“I’m really happy,” he said. “It was a really hard race because in this track, with this car, it is really hard to build a gap. The slipstream makes a lot of difference. So it was a fight from the beginning. I have to say I really enjoyed it, and I also learned a lot from this race because always being in the fight you learn a lot; you learn how your opponents behave in the race.” 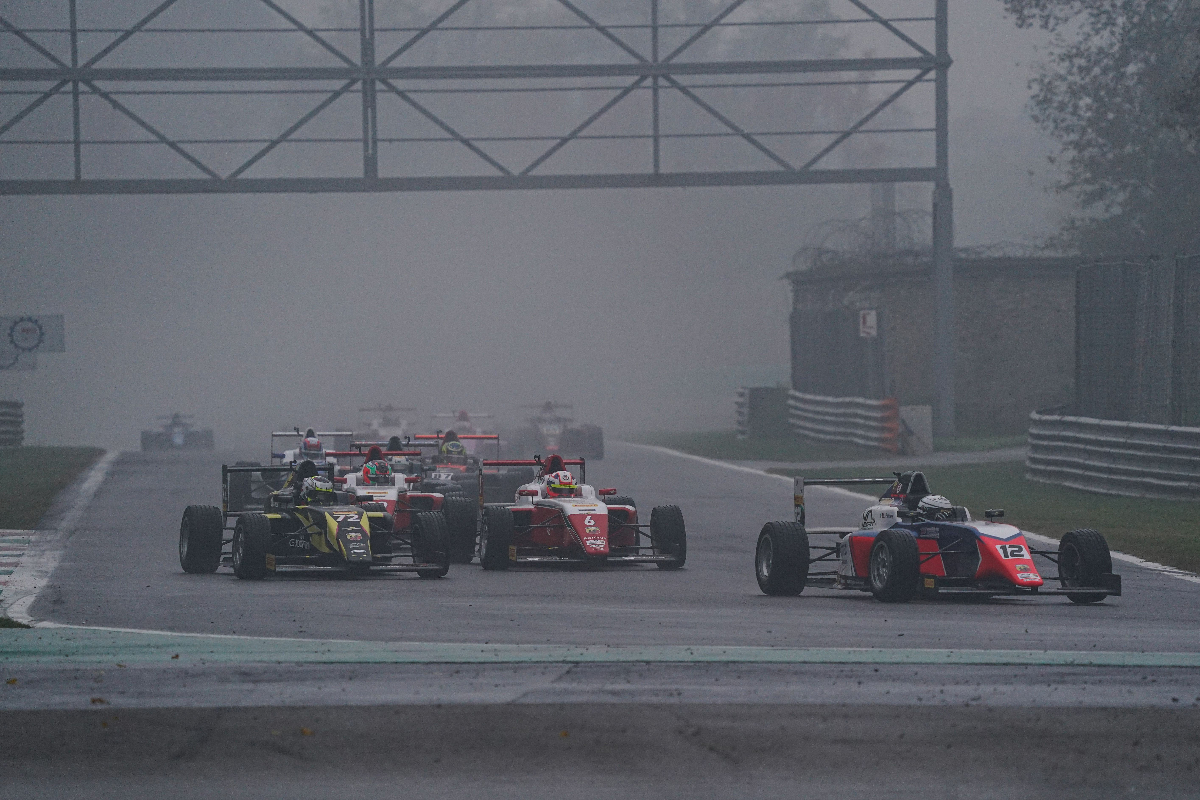 Antonelli’s father Andrea had been celeberating on Friday after his AKM Motorsport team claimed a surprise triple pole with Lorenzo Patrese, son of former F1 racer Riccardo. The previous best qualifying result for the rookie had been eighth.

Patrese’s inexperience unfortunately showed in the races. He crashed out of race one having led until “everything went in smoke because of the touch he had with Bearman, but this is racing” his father told Formula Scout.

“This weekend, even in the test that we did here in Monza before, he was always in good shape,” Patrese Sr also said. “Let’s say that this is the first race that he is not a rookie because he also did this race last year which is, of course, a small advantage. The team have worked very well and our car was very good.”

Seventh and fourth in the remaining two races jumped Patrese up to 12th in the championship standings.

In race three, he lost his victory shot on lap one as he ran wide at a greasy Parabolica. The following Bearman noted “I broke 150 metres before Parabolica and he was still flatout at that point. He got to 100m and still hadn’t braked so I was like, ‘you’re crashing’. And sure enough, he went wide and off the track.”

The third famous racing father of the paddock also had something to add, as Sebastian Montoya’s trying season ended with a crash behind the safety car which meant he dropped down to fourth in the points.

“It’s not the thing you want but at the end of the day, we’re here to learn,” he said, after his ex-F1 father Juan Pablo “called me and he was like ‘I’ve done that before!’”. 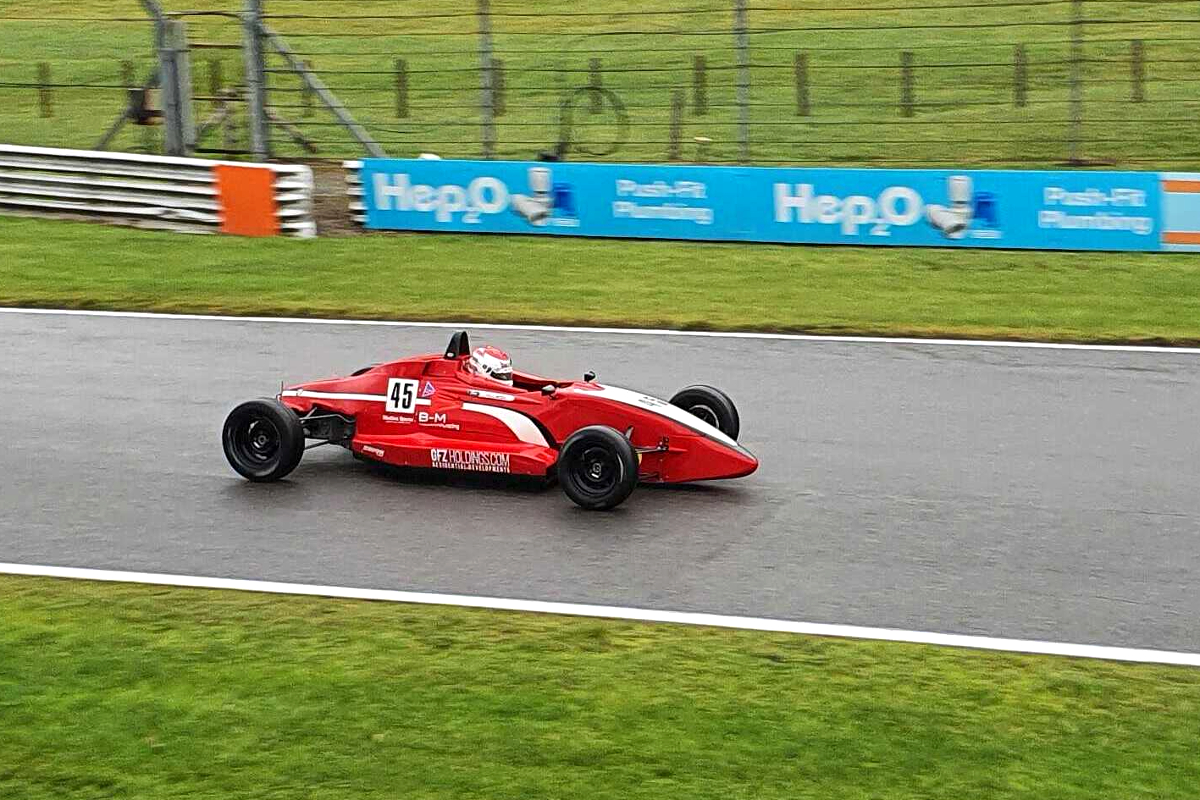 B-M Racing was celebrating the defence of its Formula Ford Festival crown on Sunday evening, but its 2020 winner Rory Smith didn’t even make the final despite showing some ominous pace.

The Anglo-Austrian beat Niall Murray to pole for their heat, but finished it in third after running wide at Druids on lap one. The semi-final was a similar story, with a strong start taking him from sixth to second. Two of those places had been gained as the safety car had been called so he had to give those back, then when the race resumed he spun into retirement.

Smith admitted to it being his own mistake, and knew he had the pace to win in worsening weather, but it meant he wasn’t into the Last Chance Race and his Festival defence was over.

However several drivers withdrew, and B-M sent Smith to the assembly area just in case. Formula Scout informed the team of the third withdrawl, just as the grid was forming on track, and Smith was allowed into the race in 29th place.

That became 28th as a driver stopped on the formation lap, but it meant the safety car was summoned and the eight-lap race actually became a two-lap fight to reach the top six and progress to the final. He’d made it into the top 20 before his engineer summoned him to the pits to retire.

“People were writing off cars left, right and centre, so I’d rather not do that,” Smith said when Formula Scout asked him why he ended his race early. “So, didn’t bother [to finish] in the end.

“The Walter Hayes Trophy is next week, so that’s why we didn’t carry on because there’s no point writing off the car. It’s one of those events like this where a lot of luck comes into it, so you need to be quick and have good luck before you can win.”