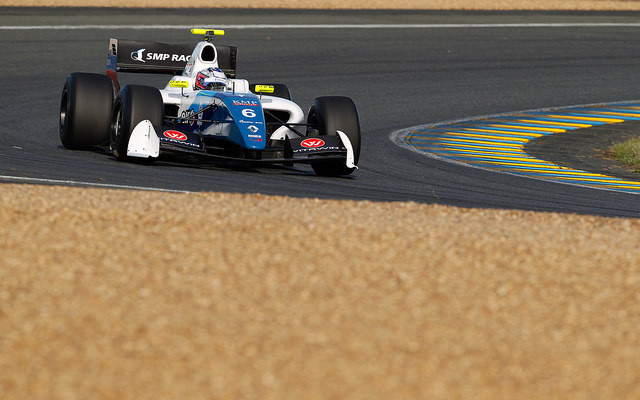 Egor Orudzhev picked up his second win in Formula Renault 3.5 with another fine defensive display in race two at Le Mans, as Oliver Rowland was confirmed as champion after finishing eighth.

Orudzhev had been third in the opening stages behind Tio Ellinas and Tom Dillmann, but benefited from staying out later in clean air before making his mandatory pitstop to rejoin ahead.

Matthieu Vaxiviere, who needed to win the race to stand any chance of taking the title fight with Rowland down to the final round, had started second on the grid but bogged down off the line and was swamped, falling to seventh.

But as drivers ahead of him made their pitstops surprisingly early (after a safety car was required when Yu Kanamaru tipped Andre Negrao into a roll at the Dunlop chicane), Vaxiviere was handed clean air and capitalised to rejoin from his later stop in second place.

The Frenchman quickly cut a two-second gap to Orudzhev, but although he spent the latter stages on the Russian’s rear wing and even got side-by-side on a couple of occasions, he could not find a way past as rookie Orudzhev repeated the defensive drive from his maiden victory at the Hungaroring.

Even if Vaxiviere had won, Rowland just needed to score one point to guarantee himself the title. He started down in 14th after a nightmare qualifying session but gained three places on the opening lap and moved into the top 10 just before making his pitstop.

He would go on to gain two further places and cross the line in eighth place, giving himself a 60-point margin over Vaxiviere with 50 available at the final round at Jerez.

Vaxiviere skated off into the gravel at the final corner and thus finished 2.388s down on Orudzhev but more than six seconds clear of Ellinas, who lacked pace and had to spent the second part of the race defending from Dean Stoneman.

A slow pitstop cost Dillmann a shot at a second podium of the weekend and the Carlin man had to settle for fifth, while Aurelien Panis?followed up his best-yet result of fifth on Saturday with a sixth.

Nicholas Latifi took seventh ahead of Rowland, who was followed by?Gustav Malja and?Nyck De Vries – the McLaren protege was ahead of Vaxiviere early on but lost out during the pitstops.