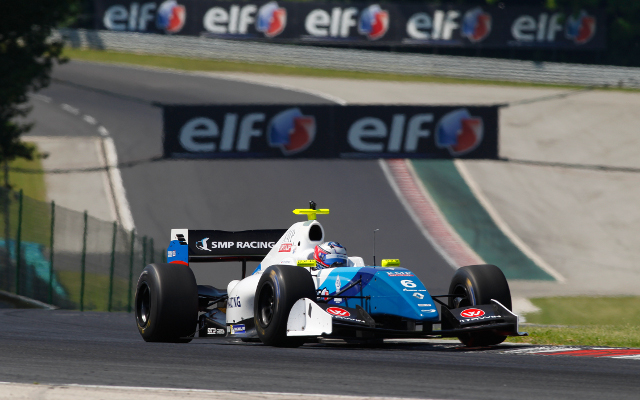 Egor Orudzhev claimed an unexpected maiden victory in Formula Renault 3.5 with a fine defensive drive at the Hungaroring.

The Russian driver got a great start from second on the grid as pole-sitter Oliver Rowland got a shocker of a getaway.

Points leader Rowland forced his way back past his nearest challenger Matthieu Vaxiviere later in the first lap, which knocked the Frenchman down to fourth behind Nicholas Latifi.

Latifi’s attempts to hold onto a podium spot saw him shut the door on Vaxiviere on the approach to Turn 2, leading to contact and a puncture for the Canadian.

The scrapping behind allowed Orudzhev to open up a lead of over two seconds early on but Rowland quickly began to close, and the SMP-backed Arden driver later found himself pursued by a train of four other cars, with Roberto Merhi and Tom Dillmann joining Rowland and Vaxiviere in the lead fight.

But FR2.0 graduate Orudzhev rebuffed every attempted overtake from Rowland, including at the final corner of the race when the Briton had a look around the outside and ended up losing second place to Merhi at the line.

The Manor Formula 1 driver had earlier passed Vaxiviere as he scored his first podium with Pons, in what had been a challenging campaign so far.

Dillmann had challenged Vaxiviere for second place at the first corner of the race but was forced wide and had to settle for fifth at the end despite finishing just 1.7 seconds behind the winner.

Dean Stoneman lacked the pace to join the fight for the win but finished sixth from 11th on the grid, ahead of the Tech 1 pairing of Aurelien Panis and Roy Nissany. Beitske Visser was ninth and Gustav Malja came through to 10th from the back of the grid.

Title contender Jazeman Jaafar was the last of the finishers in 18th after pitting early on with a puncture.