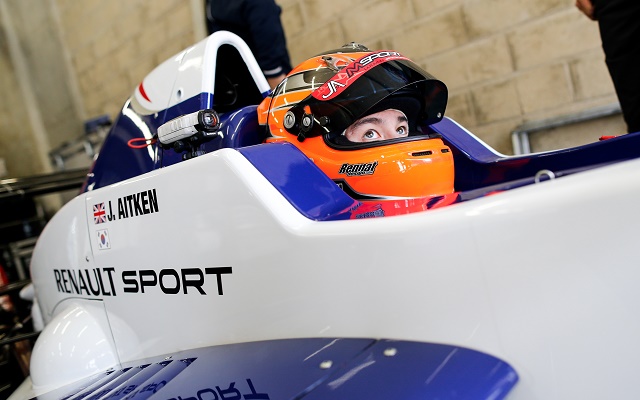 Koiranen’s Jack Aitken inherited his first win of the Eurocup Formula Renault season in race one at the Hungaroring.

Aitken took his maiden Eurocup win at this exact track last year, but finished no higher than seventh in the first five races of the season.

Here, he started and finished second, but was promoted to victory due to a penalty for leader Louis Deletraz.

The Swiss driver built up into a sizeable lead from the very beginning, but was soon given a ten-second penalty for jumping the start.

He was three seconds ahead of Aitken at the moment the penalty was confirmed and, during the remaining 15 minutes, could only stretch it to six seconds at the chequered flag.

With Aitken taking the win, Ben Barnicoat held off Kevin Jorg to claim second. Jorg dropped off by the end, just enough to allow teammate Deletraz to remain on the podium after his penalty by less than two tenths.

Martin Kodric claimed his best Eurocup finish thus far in fifth, ahead of Jake Hughes and Harrison Scott. FR1.6 NEC champion Anton De Pasquale made his debut appearance in the points in Eurocup, with Darius Oskoui and Simon Gachet completing the top ten.

As Deletraz scored, his main rivals in the points faltered. Spa winner Ukyo Sasahara was off on lap one, while Anthoine Hubert was hit by Ignazio D’Agosto and had to retire in the pits. Both Dennis Olsen and Matevos Isaakyan failed to score.