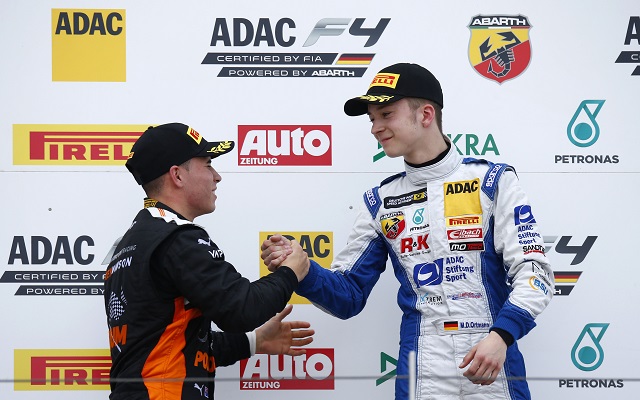 Mike Ortmann and Joey Mawson?were victorious in the two ADAC F4 races on Sunday at Sachsenring.

Ortmann, who took his maiden win yesterday, doubled up in Race 2 after stealing the lead in the penultimate lap on a safety car restart from Mick Schumacher.

The latter, starting?from pole, first had to hold off the advances of Mawson before the Australian dropping behind both Kim-Luis Schramm and Ortmann.

Schramm’s race ended prematurely after running wide and getting trapped in the gravel, which promoted Ortmann to second and allowed him to take the lead soon after.

Motopark’s Sophia Floersch fought her way up from 12th to 7th, finishing ahead of Prema duo Juri Vips and Juan Manuel Correa as well as Felipe Drugovich.

Mawson took his sixth consecutive podium and third win of the season in the final, reverse-grid race.

Ninth on the grid, he was up to third in just six laps and then took advantage of a tiny mistake from Nielsen.

The Australian then put massive pressure on long-time leader Simo Laaksonen before pulling off an overtake at Turn 1.

With just four laps to go, Mawson cruised to the finish with Laaksonen and Nielsen both taking their maiden podiums.

Ortmann could only recover to seventh, followed by pole-sitter Jonathan Aberdein, who lost his lead after being hit by Laliberte on the opening lap.