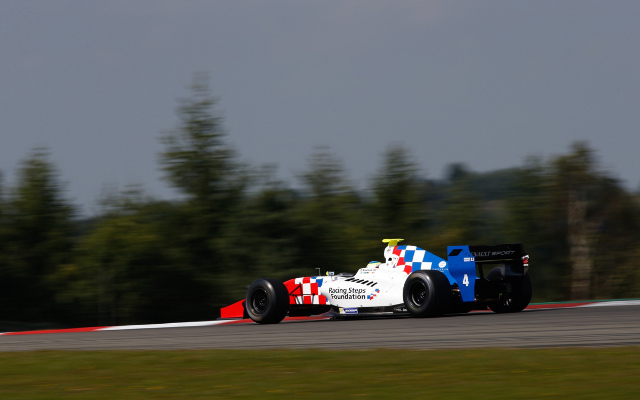 Formula Renault 3.5 championship leader Oliver Rowland claimed pole position in a red-flag-shortened qualifying session for race one at the Nurburgring.

Rowland set the pace after the first runs, and his benchmark was still unbeaten when the session was halted inside the final two minutes after Tom Dillmann had stopped.

Tio Ellinas completed a lap just after the red flags that was good enough to take pole, but it didn’t count and the Cypriot had to settle for second rather than repeating his pole from one week ago at Silverstone. Rowland was also on course to improve his time before the interruption.

Second quickest was Nyck de Vries, 0.213s behind Rowland but just 0.013s ahead of Ellinas and 0.019s ahead of fourth-placed Dillmann.

The Dutchman will drop behind Ellinas and Dillmann on the grid though due to a two-place penalty for causing a collision with Bruno Bonifacio in race two at Silverstone.

Rowland’s title rival Matthieu Vaxiviere will start from fifth and his Fortec team-mate Jazeman Jaafar will be sixth as one of the only drivers to log an improvement prior to the red flag.

Pietro Fantin was seventh ahead of Dean Stoneman. Roy Nissany was another late improver in ninth, with Gustav Malja 10th.

Yu Kanamaru claimed a fine 11th on the grid for his FR3.5 debut, while fellow Pons newcomer and GP2 veteran Rene Binder was 19th of the 20 runners.

Arden duo Egor Orudzhev and Nicholas Latifi appeared to lose out most from the red flag compared to where they would be expected to qualify, ending up 16th and 17th respectively.