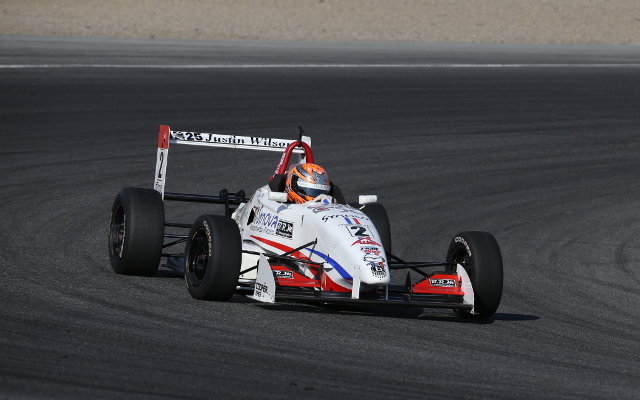 USF2000 National Championship leader Nico Jamin put himself one step closer to finally wrapping up the series, as he?set the fastest time in Friday evening’s qualifying session for the Road to Indy finale at Laguna Seca.

The Frenchman closes out his?2015 campaign with seven consecutive pole positions, and earned a crucial bonus point that will takes him nearer to clinching?the title in Saturday afternoon’s race.

He’ll start on the front row with his Cape Motorsports with Wayne Taylor Racing teammate?Aaron Telitz, who were the only drivers to set a time below the 1m26s marker despite both neglecting to do a run on sticker tyres.

Pabst Racing’s Jake Eidson now has a 51-point deficit to overcome over the two-race meeting, and will start tomorrow’s race from third, next to the series’ top rookie?Anthony Martin.

Peter Portante returned to the series for the first time since the 2014 finale at Sonoma Raceway, and will start in ninth, next to?Parker Thompson in tenth.?Robert Alon made a respectable showing in his single-seater debut – the IMSA Prototype Lites driver will start 13th out of the 15 cars on the grid.