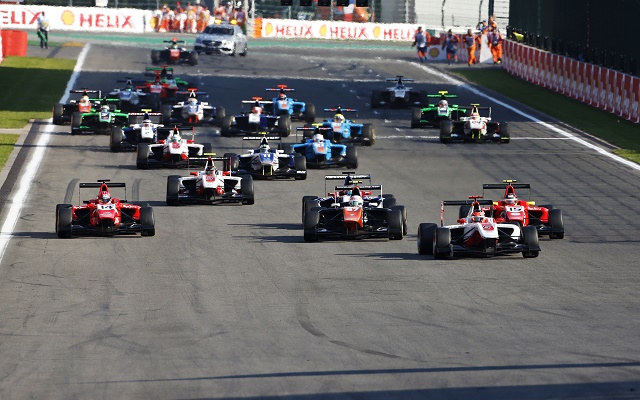 At the start, Ocon, Emil Bernstorff and Kevin Ceccon all swarmed a slow-starting Luca Ghiotto off the line and demoted the Italian to fourth.

He fought hard trying to regain a position, eventually tagging Ceccon into the rear wing into Bus Stop.

Ghiotto then completed a pass through La Source, before Ceccon’s right-rear tyre came apart due to the earlier collision and left him a sitting duck in the middle of the Kemmel straight,

Miraculously, the field got away without a major accident – but one occurred next time by, when Jann Mardenborough lost his car through Eau Rouge and went backwards into the barriers at high speed.

He emerged unhurt and the race was suspended under virtual safety car.

When the VSC was called off a few minutes later, the top three continued to hold a massive gap to the rest.

Ghiotto soon worked his way around Bernstorff on the Kemmel straight, but was then greeted with the news of a five-second time penalty.

The race settled into a rhythm over the subsequent laps, but drama followed when Seb Morris twitched through Eau Rouge, compromising his exit onto Kemmel.

Morris and Pal Varhaug then went into Les Combes side by side for eighth and came together, leading to an early end for both of their races.

Beitske Visser then came to a halt in her Trident, bringing out the VSC for the second time.

When the track went back to green, Ocon appeared to have gotten an early jump on Ghiotto, speeding up when the VSC period was about to be lifted and then slowing down further down the track.

He retained the lead as the race was suspended yet again, with Matheo Tuscher losing the car on the throttle at the restart and spearing Sandy Stuvik off.

The race looked set to conclude under yellows, but a sudden restart was given on what appeared to be the final lap – as the leaders were through Eau Rouge.

Ghiotto was caught unaware, passed by Bernstorff for second and slowing up.

The trio approached the finish line but, despite the timer for the race running out, the chequered flag was not waved, leaving the leaders to do another lap.

Eventually, Ocon crossed the line one second ahead of Bernstorff, while Ghiotto dropped three places due to his penalty.

He wound up sixth, behind Marvin Kirchhofer and Antonio Fuoco, as well as Koiranen’s Jimmy Eriksson, who had jumped the start but served his drive-through under VSC and lost no ground.

Alfonso Celis was seventh, ahead of Alex Palou, who passed Alex Bosak to claim reverse-grid pole for Sunday.