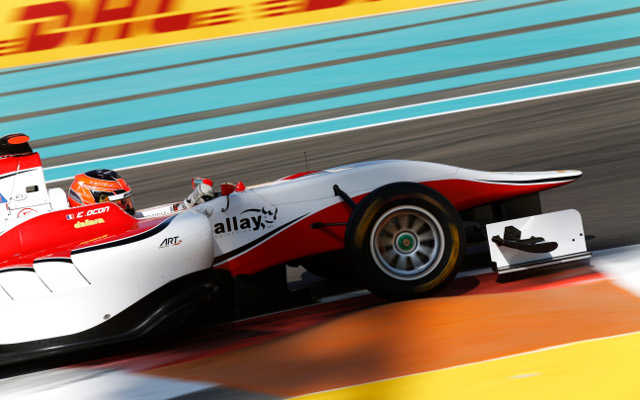 Esteban Ocon claimed an all-important pole for the GP3 title decider in Abu Dhabi on his last lap in qualifying, as rival Luca Ghiotto had to settle for fourth.

For the second week in a row, Ocon gains four bonus points to give him an effective two-point advantage over Ghiotto ahead of the two races.

Ghiotto was the driver to beat on the first runs, four tenths faster than Ocon or anybody else.

On the second runs, Kevin Ceccon was initially an interloper on pole with four minutes remaining.

Ocon found some improvement but stayed third, before being bumped to fourth when his ART team-mate Marvin Kirchhofer went second.

But on his last lap, Ocon managed to outpace Ceccon by 0.016 seconds to move onto pole.

Ghiotto had struggled to find speed at the end of the session, and although he did set his best lap on his final effort, he remained in fourth, albeit only 0.083s slower than Ocon.

Ocon’s pole position is his third in a row, after Ghiotto had claimed five out of six prior to that, but he is still chasing a first win since the season opener at Barcelona.

Jimmy Eriksson was among the frontrunners during the session and took fifth ahead of Emil Bernstorff.

Antonio Fuoco was seventh ahead of Alex Palou and Matt Parry, while Artur Janosz slipped from 10th having gone third behind Ghiotto and Ocon at the halfway point.