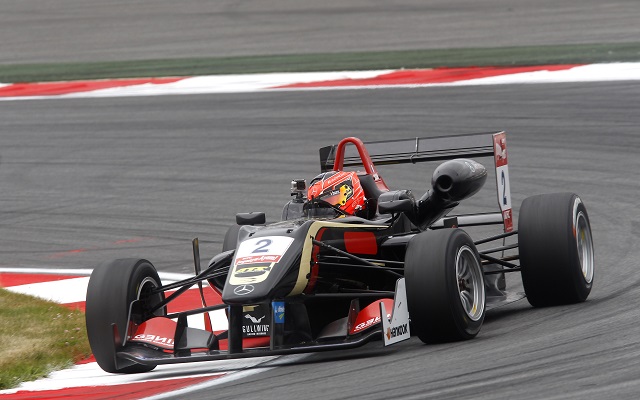 FIA F3 European Championship points leader Esteban Ocon drove a faultless race one of the series’ seventh round at Moscow Raceway to pick up his sixth win of the season.

The Frenchman got a good start from pole position and proceeded to confidently manage his advantage over second-placed Jordan King throughout the 24-lap race.

Carlin driver King managed to equal his best result in the series with another P2, having stayed within around two seconds of Ocon for much of the race and ensuring his third consecutive podium finish.

Dutch karting graduate Max Verstappen managed to overtake fellow row two starter Tom Blomqvist into T13 during the opening lap. The duo ran close together for the rest of the race, with the Dutchman even closing in on King in the second half – but there were no further changes among them, as Verstappen rounded out the podium and Blomqvist settled for fourth.

Lucas Auer and Antonio Fuoco finished where they started, taking fifth and sixth respectively. Nicholas Latifi held off Felix Rosenqvist to take seventh, while Felix Serralles and Gustavo Menezes rounded out the points, having made their way past impressive rookie Jules Szymkowiak.

Briton Jake Dennis ran in the top ten in the early stages of the race, but was among the few drivers to incur a drive-through penalty for track limits infringements.