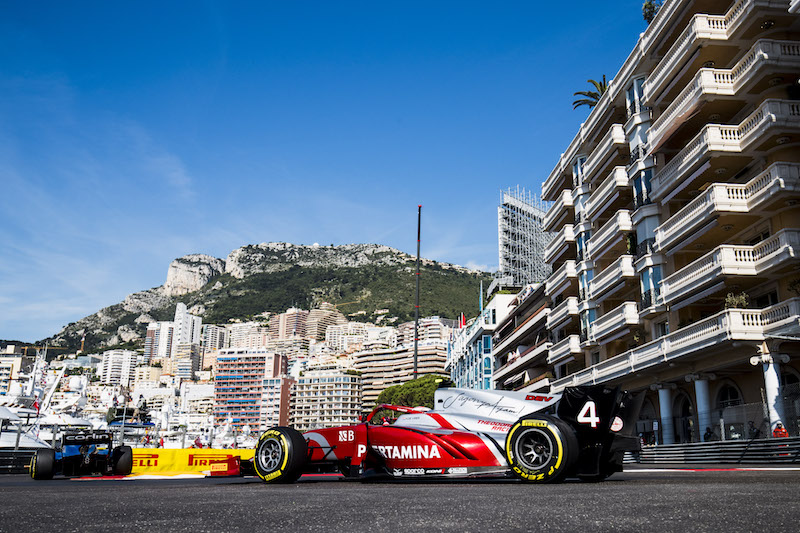 Nyck de Vries set the fastest time in Formula 2 practice in Monaco by six tenths of a second, as George Russell failed to get a quick lap in on his debut session at the track.

Prema driver de Vries went to the top of the timesheets with six minutes remaining in the 45-minute session, his lap of 1m21.670s on the supersoft tyres putting him 0.67 seconds clear of fellow McLaren junior Lando Norris, who also used the fastest of the two nominated tyres.

De Vries and Norris had come together earlier in the session, when the Dutchman came up on the Briton going slowly out of Rascasse and damaged his front wing against the Carlin driver’s right-rear tyre.

With the field split into two groups for qualifying according to odd and even numbers, 2017 sprint race winner de Vries will run in the second group, with Norris in the first.

Nicholas Latifi ultimately took second place, 0.02s ahead of Norris, who was fastest in Formula Renault qualifying on his Monaco debut two years ago.

Jack Aitken was fourth fastest in his first time driving the Monaco street circuit in a racing car, but ART Grand Prix team-mate Russell was unable to set a quick lap, spending most of the session in the pit lane with the engine cover off his car.

He will go into qualifying with just four laps of the track under his belt, the quickest one 20 seconds off the pace.

Norris’ Carlin team-mate Sergio Sette Camara was fifth in front of Alex Albon, who will go for a third straight F2 pole in qualifying at a circuit where he topped his group 12 months ago.