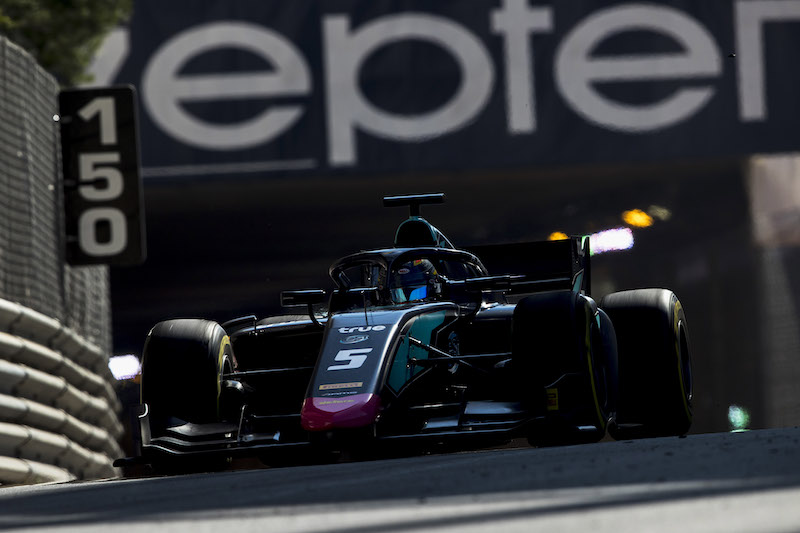 Alex Albon pipped Nyck de Vries by just 0.01 seconds in Monaco to claim his third Formula 2 pole position in a row, as title rivals Lando Norris and George Russell could only secure places on the ninth row of the grid.

Albon – who joined Charles Leclerc on the front row on his Monaco debut 12 months ago – ran in the first of the two qualifying groups, and topped it with a lap of 1m21.727s with a minute and a half left on the clock.

The DAMS driver had been baulked on an earlier lap by a slow Norris after the McLaren junior had crashed exiting the swimming pool and damaged his front wing with five minutes remaining.

Norris still crossed the line to go second fastest at the time, but was pushed back to ninth while he sat in the pits, telling his Carlin team on the radio there was “no point” in going back out because he wouldn’t improve his time due to steering damage.

De Vries started as the clear favourite for pole in the second group, particularly as his pace-setting practice time was quicker than Albon’s benchmark.

The Prema driver did go to the top of the group times with two minutes remaining, but his time fell one hundredth of a second shy of his former karting rival Albon’s effort after running deep at both the Fairmont hairpin and La Rascasse.

He may have had another shot at pole position, but Sergio Sette Camara then crashed at Sainte Devote inside the final minute, bringing out yellow and then red flags to end the session.

The Carlin-run Brazilian reported over the radio that he was worried that he might have broken a hand, and did look in pain once out of the car.

He had sat on top spot until de Vries’ lap, and if fit will start fourth on the grid alongside Artem Markelov, who was beaten by 0.107s by Albon as he qualified in the top half of the grid for the first time with the F2 2018 car.

Antonio Fuoco took third in group one at the chequered flag in front of Maximilian Gunther and Santino Ferrucci, who was fastest before being displaced by Markelov with three minutes left on the clock.

They provisionally take fifth, seventh and ninth on the grid, but Gunther is under investigation for missing a call to the weighbridge during the session.

Luca Ghiotto was third in group two, half a second off the pace, followed by Arjun Maini and Ralph Boschung.

Russell had to settle for ninth place, having only completed his first ever flying laps of the Monaco track in the 16-minute qualifying segment after an engine failure ended his practice session early.

It means he and Norris are set to line up 18th and 17th respectively, pending any penalties.

Nicholas Latifi will be at the back having been 10th and slowest in the second group.