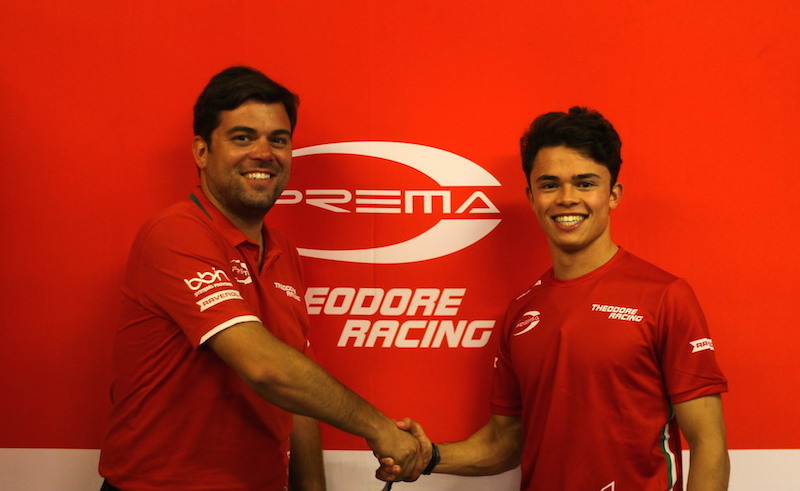 Nyck de Vries will race for Prema in Formula 2 next season.

The Dutch driver, a long-time McLaren junior, has secured the seat next to Sean Gelael having been helped into F2 this year by backing from Gelael’s father Ricardo.

He began the season with Rapax, winning the Monaco sprint race and claiming three other podium finishes, before switching to Racing Engineering for the final four rounds.

He took a further podium on his debut weekend with the team in the Spa sprint race, fought for victory in the Monza feature race until contact with Prema’s champion-to-be Charles Leclerc and qualified on the front row in Abu Dhabi.

De Vries ended the season seventh in the standings, as the second best rookie behind fellow GP3 graduate Leclerc.

“First of all, I want to thank everyone involved for this opportunity,” he said.

“I am delighted to join such a successful team as Prema and I thank them for putting their faith in me.

“We have known each other for a while, so to finally be racing together is very exciting and I can’t wait to go back to Italy.

“We’re very much looking forward to the new challenges that Formula 2 has introduced with the new car for 2018. It will be a very competitive championship, may the best win!”

Team boss Rene Rosin said:?”We are delighted to have secured the services of Nyck for the 2018 Formula 2 season.

“His skills are outstanding and we hope that, together with Prema, he will be able to make the most out of his talent and fight for the title, while helping us to get a head start for the new season.

De Vries’ future with McLaren, who signed him in 2010 before he claimed two karting world championships, has been subject to speculation amid the rise of Lando Norris, but racing director Eric Boullier confirmed he “is a valued and popular member of McLaren’s young driver programme”.

Boullier added: “We are delighted he will continue in F2, consolidating his performance in last year’s series. His experience will be an advantage and stand him in good stead for 2018.”

De Vries will drive for Prema alongside Gelael in the tests that take place in Abu Dhabi from Thursday to Saturday this week.

The Italian outfit is the second team to complete its driver line-up for 2018 after the returning Carlin announced it would run Norris and Sergio Sette Camara next year.