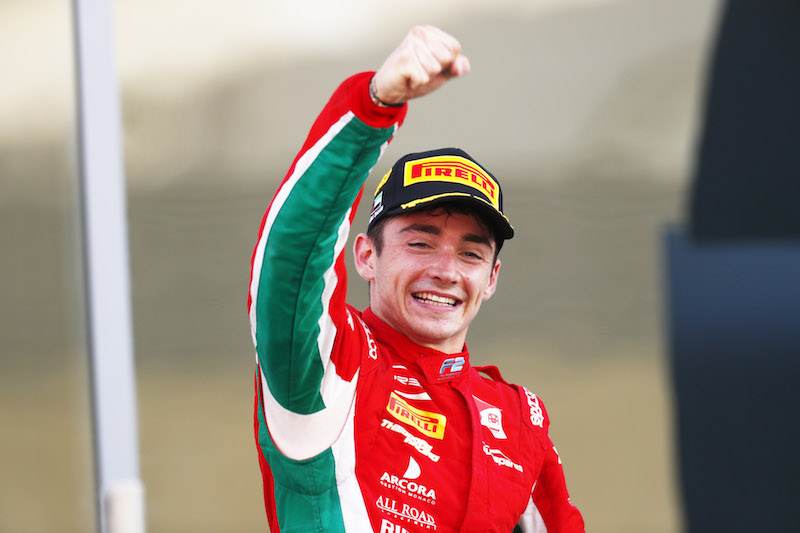 Charles Leclerc passed Alex Albon in spectacular fashion on the last lap of the season to win his final race in Formula 2 in Abu Dhabi.

From second on the grid, Albon took the lead off the start as Jordan King made a slow getaway from reversed-grid pole position.

Leclerc battled with King over fifth place in the opening laps, eventually making the place his.

His charge to the win truly began on lap 11 of 22 when he passed Nyck de Vries for fourth, before taking third from Nobuharu Matsushita three laps later.

On lap 18, Leclerc took second place away from Nicholas Latifi into Turn 8, with Albon 1.5 seconds up the road having responded to mid-race pressure from the Canadian.

By the end of the following lap, Leclerc had reduced Albon’s lead to just half a second, and might have been able to pass his former GP3 rival and team-mate had it not been for yellow flags at Turn 11.

With DRS out of action, Albon stayed ahead through the penultimate lap too, chasing his maiden F2 victory.

On the final tour, Leclerc tried to get as close as possible into the Turn 7 hairpin that leads onto the back straight, and actually made contact that caused Albon to slide wide and put the cars side-by-side down the straight.

Initially, Albon was able to pull ahead and drove to the left-hand edge of the track to cover the inside, but Leclerc used the slipstream to squeeze back alongside, just keeping inside the track limits.

Under braking he sealed the place and with it his seventh victory of the year.

Latifi completed the podium ahead of Matsushita, who had challenged his ART team-mate Albon on the inside of Turn 1 at the start of the race.

Luca Ghiotto and Artem Markelov finished fifth and sixth to secure the teams’ title for Russian Time in its final race in the category ahead of Prema and DAMS.

Markelov, who inherited the feature race win late on Saturday night, passed Ghiotto on the brakes at Turn 17 in the early stages for seventh, before causing a puncture for Jordan King when he went to pass him on the approach to Turn 11 on lap six.

Ghiotto came back past Markelov lap later, and right behind the pair now was Oliver Rowland, who had started last after being stripped of his feature race win for a technical infringement.

The DAMS driver went from 20th to 13th on the first lap, but would be unable to make further progress after catching Markelov, despite the Russian struggling with front wing damage from the King contact.

Both put passes on Nyck de Vries before the Dutchman banged wheels with Louis Deletraz – with whom he switched seats for the final four rounds of the season – over the final point.

With de Vries sent off track and Deletraz forced to stop with damage, Sergio Sette Camara nipped through for the final point on the day it was confirmed he would team up with Lando Norris at Carlin next season.

After the engine failure that stopped him in his debut F2 feature race, Norris crossed the line behind Sette Camara in ninth, but a five-second penalty dropped him to 13th.