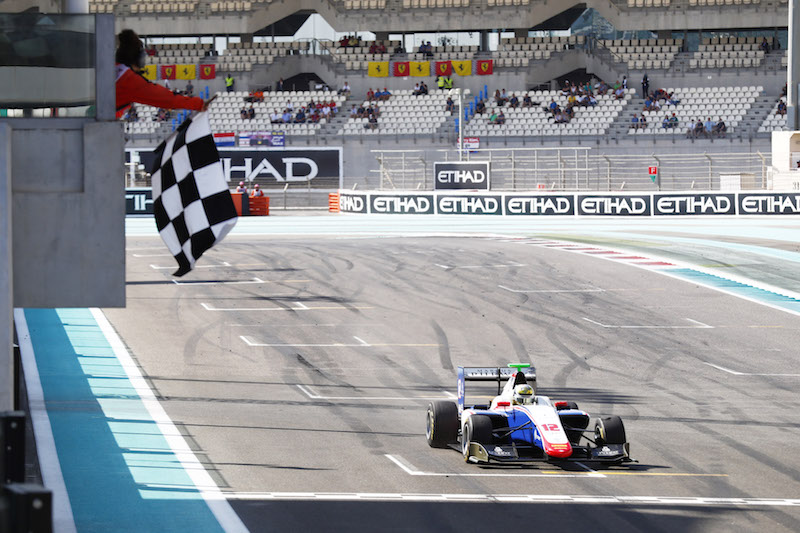 Tveter made a good start from reversed-grid pole position to lead fellow front row starter Boccolacci, but the Frenchman passed him with a late-braking move into Turn 11 on lap three, only just staying on the track after going deep.

After that Boccolacci was never troubled has he clinched his first GP3 win.

A week after his Macau Grand Prix triumph, Dan Ticktum had a storming drive to the podium despite being slapped with a controversial track limits penalty.

Starting fifth, Ticktum gained a place on lap seven of 14 when he passed Alessio Lorandi on the run to Turn 11, getting close to the barriers on the inside.

He repeated the move a lap later on Steijn Schothorst to take third, and it was this that earned him a five-second time penalty after crossing the white line marking the edge of the track.

By the time he was served the five-second penalty, he was 4.999 seconds ahead of Schothorst.

He then soon passed Tveter on the outside into Turn 11 to move into second on track, but the penalty would drop him to third. It was still DAMS’ first podium of the season in its last GP3 race.

Lorandi tried to repeat Ticktum’s move on Schothorst but misjudged it and dived out of the Dutchman’s slipstream too late, breaking his front wing and forcing him to pit.

Race one winner Niko Kari caught his Arden team-mate Schothorst on the last lap and tried to pass on the inside of Turn 19.

This led to contact between the team-mates, opening the door for champion George Russell to finish fourth.

The ART driver had fallen behind Kari on the first lap after a bumpy off-road trip when he tried to run outside Arjun Maini at Turn 3.

Anthoine Hubert, who was denied the chance to start on reversed-grid pole by a penalty for a virtual safety car offence in race one, came through from 11th on the grid to finish fifth.

Sixth went to Kari after he fended off a last-lap attack from Maini, who then finished behind Bruno Baptista after an off-track pass from the Brazilian.