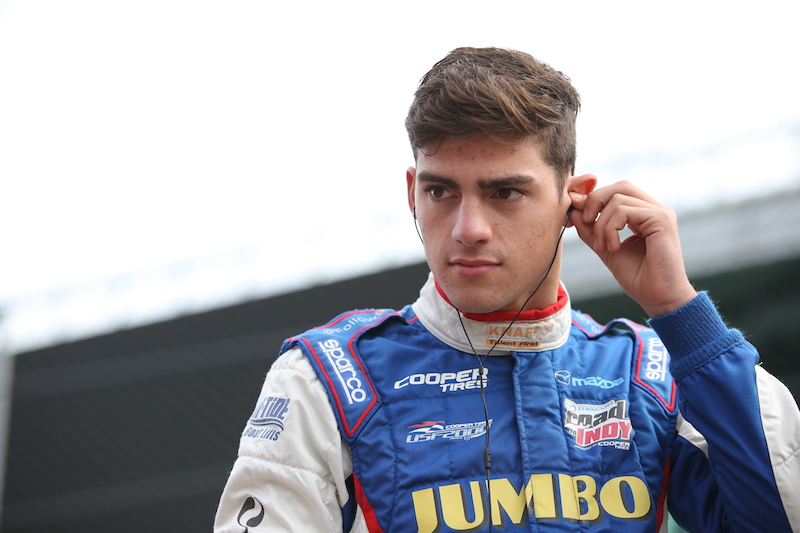 USF2000 runner-up and MRF Challenge title contender Rinus VeeKay will step up to Pro Mazda next year with Juncos Racing.

Dutchman VeeKay made his car racing debut last year in the V de V single-seater championship, and travelled across the Atlantic ocean to race in USF2000 this year with Pabst Racing.

He won three races and lost out on the title to Oliver Askew by seven points, the equivalent of a 14th place finish.

Although he trialled Belardi Auto Racing’s Indy Lights car in the Chris Griffis Memorial Test, he will instead move onto the intermediate rung of the Mazda Road to Indy ladder.

He has become the first confirmed entrant for the 2018 Pro Mazda season, when a new Tatuus car will be introduced that shares underpinnings with the?USF2000 that car debuted this year.

?I feel very honoured that I can join such a successful team,? said VeeKay.

?They have a very professional attitude and from the very first moment I felt at home. I was also able to visit the team?s workshop in Indianapolis where they have state-of-the-art facilities, which impressed me.?

Juncos Racing ran Victor Franzoni to the Pro Mazda title this year, and also took Spencer Pigot and Conor Daly to the top spot in 2014 and 2010 respectively.

?I am thrilled to announce Rinus is joining Juncos Racing for the 2018 Pro Mazda season,? announced team owner Ricardo Juncos.

?We first worked with Rinus back in October testing at Mid-Ohio and were very pleased with him all around.

?He was very fast on track, and had a great professional approach when working with the crew and engineers.

?Rinus showed he will be a top contender on track and he is going to be an incredible asset to our Pro Mazda lineup this coming year.?

After winning in the opening round of his second MRF Challenge campaign in Bahrain,?VeeKay last week tested the outgoing Formula V8 3.5 car, setting the fastest time the his first morning.