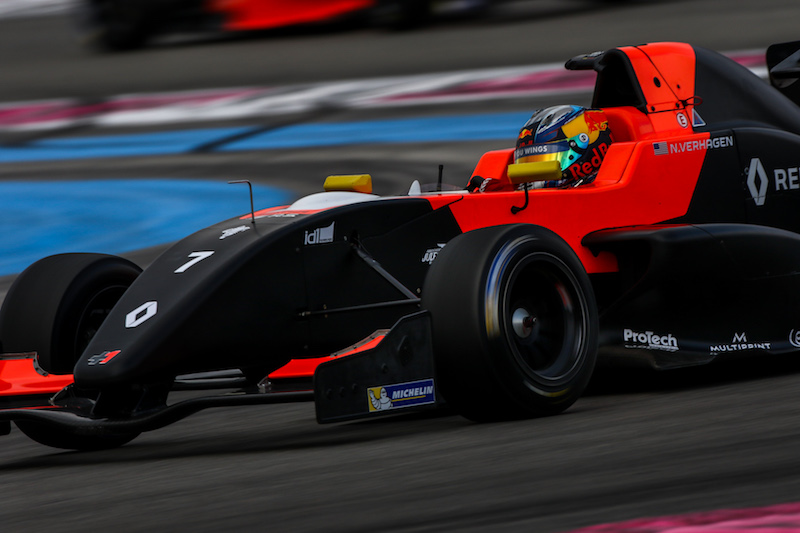 The American, who finished 11th in the Eurocup in his first season in Europe driving for MP Motorsport, had previously set the pace with Tech 1 at the official rookie test after the season finale at Barcelona.

After going 10th fastest in the morning session at Paul Ricard, Verhagen claimed top spot in the final 20 minutes of the day with a time of 2m03.365s.

“I feel really good at Tech 1 Racing,” he said.

“I had a lot to learn during my first year in the Formula Renault Eurocup, but now I am ready to use that experience to show what I can do in my second season.

“MP Motorsport is a great team, but Tech 1 Racing has a bit more experience and I feel that it allows me to work even better and to make good progress. Let?s carry on!”

After fielding all eight of its cars in the Barcelona test, the teams’ champion has since thinned down to a four-car testing line-up including rookie champion Max Fewtrell, who finished the day in fourth position.

That was just behind Verhagen’s former MP team-mate Richard Verschoor, who is driving the Josef Kaufmann Racing car Sacha Fenestraz used to win the 2017 title.

Fifth in the afternoon, and fastest during the morning, was another R-ace GP driver Charles Milesi, who scored a sixth place in a wildcard Eurocup appearance at his home track in August.

Milesi, also a rival of Martins in French Formula 4 this year, was the only driver to dip below 2m04s in the morning, his 2m03.974s enough to beat Verschoor by 0.083s.

Ending the day sixth was double F4 champion Christian Lundgaard at MP Motorsport, who held top spot with half an hour of the afternoon session remaining.

Alexander Vartanyan, who tested for R-ace GP in Barcelona but has since been working with Arden Motorsport, completed the top 10.

Only 21st in the afternoon, continuing Kaufmann driver Yifei Ye had been third in the morning, followed by Fewtrell, Sargeant, Lundgaard, Martins and Vartanyan.

Another to have run with R-ace GP in Barcleona, karting graduate Clement Novalak has joined Ye and Verschoor at Kaufmann, with European karting champion Sami Taoufik in action for Arden.