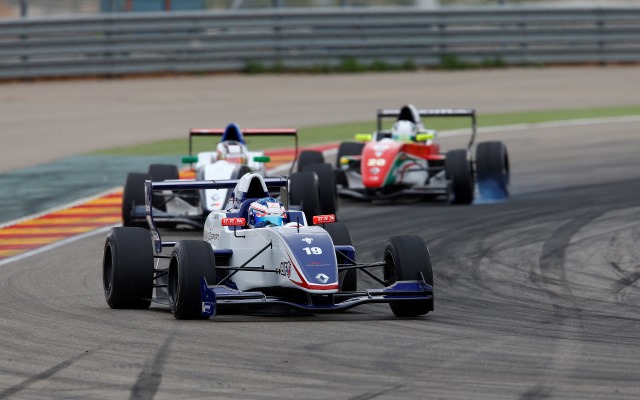 McLaren development driver Nyck de Vries took the flag in the first Eurocup Formula Renault 2.0 race of the season in a controlled manner.

Having started the race from pole, the championship favourite led the entire way, finishing with a comfortable 2.872 gaps ahead of Tech 1 driver Egor Orudzhev.

Orudzhev, who started in third, got the jump on ART JT’s Aurelien Panis off the line and put early pressure on de Vries, before making a mistake and holding back for the rest of the race.

Egor held on for second after defending from Prema’s Bruno Bonifacio, who claimed the final podium spot in front of Alex Albon.

Panis eventually ended up in fifth place, one spot ahead of JKR’s Gustav Malja, who recorded his best finish in the championship so far after a long scrap with rookie Matt Parry. Parry?s climb from 13th on the grid to seventh proved to one of the headline drives of the day.

There was a similar performance on display from Koiranen?s Ignazio D’Agosto, who crossed the line eighth from 12th on the grid. Meanwhile, Simon Gachet will have been pleased to claim some points on his debut in the series with ninth place, whilst 17-year-old BRDC F4 graduate Matthew Graham rounded out the points in his first Eurocup outing.

There was an incident involving Lotus Junior F1 driver Callan O’Keeffe and Matevos Isaakyan, the two having collided early on and falling out of points contention. Meanwhile, Kevin Jorg and Steijn Schothorst wound up dropping out of the top ten in separate incidents, with the latter being investigated by race stewards.